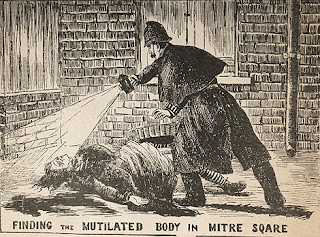 In Buck's Row, Whitechapel, 42-year old Mary Anne Nichols, a local prostitute, is found murdered; her body is still warm, there is a ghastly slash across her throat. While two previous murders had attracted some attention, it's generally held that the unfortunate Nichols is the first victim of the infamous "Jack the Ripper."

Police say the wounds are the work of a madman. On 8 September, not far from Buck's Row, another streetwalker, Annie Chapman, was found with "wounds of a nature too shocking to be described," according to The Times.  Her womb had been cut out, the entrails tied around her neck. On 30 September, two more victims were found; Catherine Eddowes and Elizabeth Stride; both eviscerated, obviously "the work of the same fiendish hands."

At London's Central News Agency, a letter from "Jack" arrived: "Double event this time. Number One squealed a bit; couldn't finish straight off." Panic gripped all London and the police were subjected to unprecedented abuse. Rumor was king; several "suspects" barely avoided the mob's noose. There was a lull.  Then, on the morning of the Lord Mayor's Day, 9 November, the body of Mary Kelly was found, butchered in her bed in a grimy boarding house.  Mary was - apparently - the last victim. The killings suddenly stopped. No one was ever charged.

Exhaustive research and lively controversy continues to this day. Was "Jack" possibly Montague Druitt, a young London lawyer who threw himself into the Thames in early December? The most scandalous theory - broadcast on the BBC, no less - involves the Royal Family. Supposedly, the Duke of Clarence, eldest son of the Prince of Wales, married a Catholic shopgirl in the East End who bore his child. The story goes that Mary Kelly, "Jack's" last victim, either witnessed the wedding or midwifed the birth and made the fatal mistake of blackmail. The other women were either slain to provide "cover" or because they had contact with Kelly. The actual murders, goes the theory, were the work of Sir William Gull, a prominent Mayfair obstetrician.  It must be pointed out that the doctor was then in his 70's and recovering from a slight stroke. The plot reached all the way to Downing Street. Prime Minister Salisbury allegedly called off the police.

If you're not buying into that, and most do not, the best website on the subject, http://www.casebook.org/, provides a list of all 31 possible "Rippers."