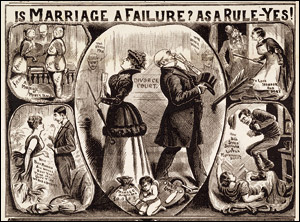 "The greatest newspaper controversy of modern times" rages on.  The Daily Telegraph had asked its readers to answer the question "Is Marriage a Failure?" This came in response to a sensational essay in The Westminster Review by an early feminist Mona Caird who had gone so far as to proclaim the institution of marriage a "vexatious failure."

For weeks the Telegraph published responses, affirmative and negative; in all 27,000 letters were received. Today's samples include, among the nay-sayers:

A gentleman from Leeds, entrapped by the wiles of a "garrison hack" who complains that his marriage has produced "years of misery." He calls marriage "the great delusion of the age, and it seems to me that a large proportion of young men entering upon it are, like myself, LOST BEYOND REDEMPTION."

A gentleman from Essex who writes: "We don't actually fight, but both of us enjoy ourselves better when t'other dear charmer's away ... Surely if two people really wish to untie the knot there ought to be some method to allow them to do so. My wife says that is the only sensible remark I have made in two months." The letter is signed only "The Dog."

Not surprisingly, the clergy weigh in in favor of matrimony:
A cleric from Bath, married twelve years, submits an 8-point recipe for happiness, among them, mutual sympathy, proportionately divided income, a moderate family - he suggests three children, and finally, "Careful avoidance of those "Platonic friendships" which are so frequent a cause of disagreement."

The rector of Walton West and Talbenny proposes Draconian measures: "If a man cannot live happily with the wife of his bosom because he has a bad temper and is tyrannous, or because he is a drunkard, or is unfaithful, I would release him from her society. In the one case I would release him by imprisonment and hard labor until his temper had improved, in the other by transportation, and in the third case by hanging."

And so the debate continued until "Jack the Ripper" distracted the public's attention.
Posted by Tom Hughes at 4:26 PM