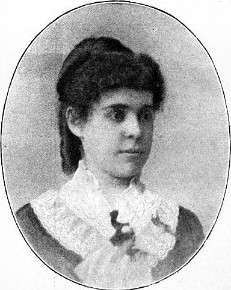 After a remarkable fortnight of mass meetings and trans-Atlantic petition-drives, the Home Secretary spares the life of Florence Maybrick. Alabama-born, Florence had been convicted of poisoning her estranged husband James, a wealthy Liverpool cotton broker. The Crown had called it "a murder founded upon profligacy and adultery... carried out with a hypocrisy and a cunning which have been rarely equalled."

Here are the details. In May, Maybrick died at Battlecrease House in suburban Aigburth after a peculiar illness, despite the "care" of several doctors whose litany of drugs and patent medicines proved of no avail. His last words to his wife were: "Oh Bunny, how could you do it?" Shortly before the master's death, suspicious servants wired his brother. "Come at once; strange things going on." When the postmortem revealed traces of arsenic, the grieving widow was arrested.

The redoubtable Sir Charles Russell headed the defense. Arsenic was commonplace in the Maybrick's Merseyside home; Florence used it for "skin eruptions," while James was an addict. In fact, defense toxicologists argued that death was more likely due to arsenic withdrawal than the contrary. But Florence was undone by the sordid details of her brief affair with Alfred Brierly, a cotton agent, including a letter (opened by a servant) in which she wrote that James was "sick unto death."

The trial was held by Justice Sir James Fitzjames Stephen, a highly respected but aged and failing jurist.  His conduct of the case was much criticized.  His charge to the jury made it seem more a divorce case than a murder trial.  Meanwhile, Mr. Maybrick's mistress and bastard family were never mentioned. Despite the complexity of the case, the jury verdict and death sentence took less than an hour. The outcry was immediate.

The New York Times correspondent said the country had been gripped with "Maybrick-mania ... Nineteen out of every twenty persons I have talked with believe, or at least think it is probable, that she deliberately killed her husband; yet perhaps fifteen of this number would join the agitation for her free pardon, and five or six would say frankly -that they don't care whether she poisoned the tiresome old fool or not."  Finally, the Home Secretary agrees to commute the sentence to life, finding the evidence "does not wholly exclude a reasonable doubt." Queen Victoria wasn't at all pleased that "so wicked a woman should escape by a mere legal quibble."

Florence was freed from prison in 1904 and returned to America where she died in obscurity in 1940.

In 1992, a diary surfaced - allegedly written by James Maybrick - in which he boasted of being Jack the Ripper.  Its authenticity is defended and disputed with equal vehemence.
Posted by Tom Hughes at 4:58 AM