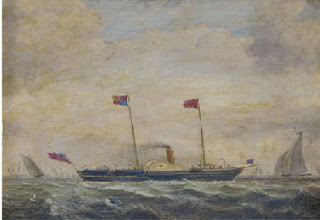 With the Queen aboard, the royal yacht Alberta is involved in a tragic and embarrassing accident in the crowded Solent, during the height of the yachting season. The Alberta collides with and slices in half a much smaller boat, the Mistletoe, which quickly sinks. Despite the efforts mounted by the Alberta's crew, three people - 2 Mistletoe crewmen and a sister-in-law of the owner - are lost.

The Queen is greatly upset. "The poor lady, it is too awful, and I cannot get over it ... most harrowing scenes ... the crash, shock and the complete disappearance of the yacht will never be forgotten!"

The Alberta is commanded by Prince Victor of Leiningen, the Queen's nephew, who is much criticized in the Press for the vessel's speed (the 350-ton steamer is doing 17 mph in a crowded channel) and the lack of adequate lookouts. However, separate civilian inquests reach no verdict as to culpability and the Admiralty Board places the blame on the Alberta's Staff Capt. Welch, who is reprimanded for "not having exhibited sufficient care and attention." Prince Victor is exonerated; the board concludes "His Serene Highness [was] unavoidably taken up by attendance upon the Queen."

Many thought the Prince had been treated too leniently, a feeling that was not helped by an ill-advised letter from the Queen praising his seamanship. When Victor was hissed in the streets, the Queen blamed it on "low Portsmouth people." As for the Mistletoe, the families of the dead were indemnified and the yacht-owner paid for his loss.

Although The Times thought the matter was resolved to "general satisfaction," questions as to the Queen's travel habits were raised in the Commons.  When the Queen travels by rail, the track is cleared in advance and The Spectator thought that should be also be the plan on the Solent: "The Queen has no time to waste upon her journeys, is not in health to bear protracted fatigue, exposure and weariness, and very probably enjoys, like the rest of mankind, the pleasure attendant upon rapid locomotion."

A painting of the Alberta on the Solent waters.
Posted by Tom Hughes at 3:16 AM