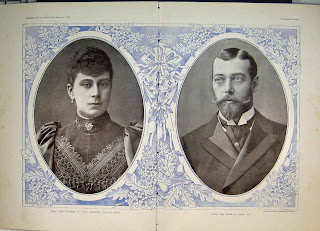 Rumors of bigamy dog the Royal family. George, Duke of York, lone surviving son of the Prince of Wales and second in line to the throne, is newly wed to Princess May of Teck. When the betrothal was first announced, The Star, a radical daily, charged that the Duke was already married to the daughter of a naval officer he'd met while on duty at Malta in the Mediterranean and there were children. George scoffed: "I say May, we can't get married after all. I hear I have a wife and three children."

Given the -shall we say - irregular marital habits of the Prince of Wales and the scandalous conduct of George's elder brother, the late and unlamented Duke of Clarence, Queen Victoria saw little humor in the subject. She was reportedly furious with the Archbishop of Canterbury - who married George and May - but whose ham-handed denial of the story only seemed to bring it to new ears. So, in The Times, purportedly in response to an inquiry from a Mr. A. Barnard of Middlesborough-on-Tees, the Palace issues the following statement:


The report to which you allude is so obviously invented for the mere purpose of causing pain and annoyance to an innocent young couple that his Royal Highness has always declined to allow the story to obtain further currency by contradiction from him; but it is nonetheless cruel and malignant.

It was at Malta - "a hotbed of malevolent tittle-tattle" - that the rumors began. Denials notwithstanding, the story of a secret marriage, crushed by a vengeful old Queen, was believed - at least sentimentally - by many Britons and it resurfaced in 1910 when George succeeded his father on the throne. The supposed first wife - an Admiral's daughter now a Mrs. Trevelyan D.W. Napier - came forward in a successful libel action against the author of an article entitled "Sanctified Bigamy."

It is interesting to note that at the time of the 1894 denial, George and May were celebrating the birth of their first child, the future King Edward VIII. Could it be that the father of the man who would give up the throne for "the woman I love," gave up the woman he loved for the throne?
Posted by Tom Hughes at 12:28 PM