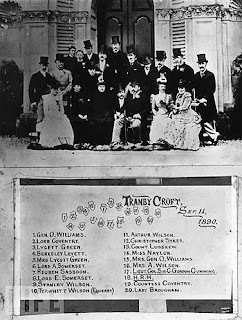 The Prince of Wales and his party are stopping at Tranby Croft, the Humberside country seat of Arthur Wilson, a millionaire shipowner. The races are being held at nearby Doncaster; in the evening the Prince, as is his wont, brings out the cards for a game of baccarat.

On the first night, some of the younger members of the house party believe they see Sir William Gordon-Cumming of the Scots Guards cheating. Sir William is a close friend of the Prince and is a regular at the royal card table.  However, under cover of his cards, Sir William was apparently adjusting his stake, based on his hand. The "observers" set out to watch him more closely on the second night. He again won quite a bit of money, including the Prince's. That evening, the Prince was presented with the "evidence."  Confronted by the Prince and others, Sir William protests his innocence.  However, to avoid a great scandal, he will agree to sign a pledge never to play cards again. All parties agree that the unpleasantness shall remain their secret.

The story inevitably leaked - one of the Prince's lovers, Daisy Warwick, Lady "Babbling" Brooke, was blamed. Sir William sued his accusers for libel. The Prince was once again forced to spend uncomfortable minutes in a witness box, mumbling his answers so that few could hear him. The evidence against Gordon-Cumming was weak; the editor of Truth declared, "On evidence such as that of these five witnesses I would not hang a dog, much less consign a distinguished officer to a living death." Nonetheless, Sir William lost his libel action; the signed pledge being the most damning evidence. He was a ruined man, expelled from his clubs and the Guards. The Prince declared, "Thank God! the Army and Society are now well rid of such a damned blackguard."

The Queen called it a "terrible humiliation" for the Prince, "it must do his reputation great harm." The Times suggested that the Prince might well sign the same pledge forced upon Sir William, i.e. not to play cards again. Overseas papers - less restrained - enjoy a field day. A German cartoon of the Prince carries the caption: "Ich Deal!"
Posted by Tom Hughes at 10:39 AM