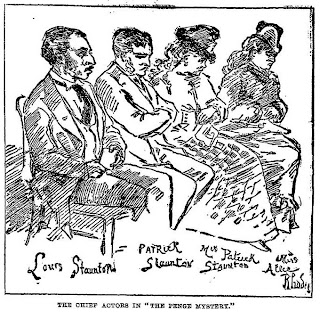 Trial opens in London for four people accused of perhaps the most heinous murder during Victoria's long reign. 34-year old Harriet Richardson - a woman of limited intellect but with an estate of some £2000 - had married a fast-talking 24-year old auctioneer's clerk named Louis Staunton. Harriet's suspicious mother had first tried and failed to have her daughter committed before the wedding.

Staunton took his new bride to his brother's farmhouse in Penge, a Kentish village just outside London. There, prosecutors say, Harriet - by then pregnant - was locked away on a diet of bread and water. Louis, meanwhile had his way with the local servant girl, while his savage brother, a failed artist, and his wife, took turns beating the defenseless Harriet. A son born amid such brutal squalor lived for only days. When Harriet died in April, the naive rural coroner certified "death by cerebral disease."

When Harriet's family forced a second inquest, a new panel of doctors ruled "death by starvation and neglect." The Stauntons and their consorts face charges of murder.

The trial is horrific in detail; Harriet, testified one doctor, had been found in "the filthiest state possible," the dirt on her body had to be scraped off like "the bark on a tree." The defense team - headed by the rising barrister Edward Clarke - presents expert rebuttal witnesses who argue that the woman's death, while undeniably horrible, may have been the result of natural causes, a form of tubercular meningitis. Clarke thought so well of his closing speech, he had it printed (42 pages).

The jury took little more than an hour to convict all four, setting off raucous cheering in the crowded streets outside the Old Bailey. The judge ordered the gallows for the perpetrators of "a crime so black and hideous." The verdicts were immediately challenged. The Lancet, the leading medical journal, declared the verdict was "entirely unsupported by the evidence," in fact, it was impossible to say which of "several morbid conditions" sent Harriet to her early rest.

The daily papers were filled with painfully detailed letters arguing both sides. The Home Secretary caved in; Louis Staunton's mistress farm-girl was set free and Louis, his brother and sister-in-law had their sentences commuted to life.

Sketch from the Penny Illustrated Paper.
Posted by Tom Hughes at 9:33 AM