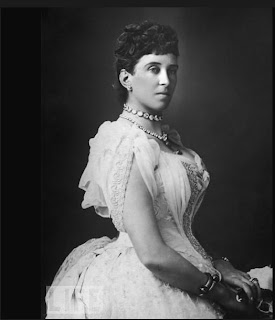 The death of George Granville Leveson-Gower, eccentric 3rd Duke of Sutherland, opens one of the nastiest estate squabbles in the quite frequently nasty Victorian peerage.

Dead at 64, the Duke leaves the largest landed domain in the realm. Known for chasing fire engines around London and amassing staggering gambling debts, the Duke's personal life was no less unusual; Queen Victoria had observed: "He does not live as a Duke ought." The Duke had long lived apart from his first Duchess, who died in 1888. The Duke had for many years carried on an open affair with Mary Blair, the daughter of an Englishman in the Indian Civil Service. Her complaisant husband had put up with this until he died in a shooting accident while out hunting with the Duke.  Imagine.

Mrs. Blair stayed with the Duke at both Stafford House in London and Trentham, the family's magnificent country seat. When the Duchess was dying, the Duke did not show a great deal of concern.  Upon her death, His Grace flaunted the "mourning period" and sailed immediately for Florida where he married Mrs. Blair.

Just four years later, the Duke's newest will leaves the dowager "Duchess Blair" in complete control of the 1.5 million pound estate with a codicil, settling upon her directly the sum of £150,000. His eldest son, Cromartie, now the 4th Duke, immediately challenges the will. While a team of family lawyers were going through the estate's papers at Stafford House, Duchess Blair calmly removed one document and threw it into a flaming grate, "It was a letter from me to my husband before I was married. I shall do as I please."

A special court panel rejected her apology, supported only by her claim that "the Duke would have wanted the letter destroyed," and she was found guilty of grave contempt. She spent five weeks in Holloway Prison, the only jailed Duchess in the Victorian era. Her fine was repaid by freinds who said she had only "unflinchingly carried out a dying request of her husband." Finally, in June of 1894, the two sides reached a settlement; the Duchess Blair renounced all claims to the estate in return for £750,000 . Refusing to take a check, she demanded and received cash.
Posted by Tom Hughes at 10:50 AM