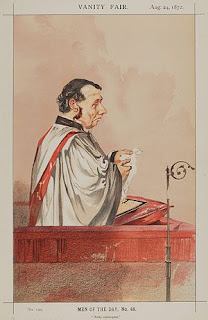 In his 15 years on the hill, Vaughan had been credited with saving the school. Enrollment in 1844 had fallen to below 70, and those of such bad a character the local vicar suggested he dismiss the lot and start anew. Harrow now boasts an enrollment of 450. Hence, the shock which almost every "Old Harrovian" felt when he heard the news. In his resignation letter, Vaughan cites "the long pressure of those heavy duties and anxious responsibilities which are inseparable from such an office, even under the most favorable circumstances."  No amount of importuning could make him reconsider.

The mystery would not be explained until after Vaughan's death. He was being threatened by the father of a former student, John Addington Symonds. Symonds, a future poet, had been miserable at Harrow. He was both disgusted by and fascinated with the rampant carnality of the boys public school. One of his few friends was Alfred Pretor who made the mistake of sharing with Symonds "love" letters he'd received from Dr. Vaughan himself. In a jealous rage, his own homosexuality repressed (at the time), Symonds gave the letters to his father. The elder Symonds, a Bristol physician, wrote Vaughan to demand his immediate resignation or the letters would be sent to The Times.

Dr. Vaughan met with the elder Symonds; Mrs. Vaughan plead on her knees, acknowledging her husband's "weakness," but the doctor was implacable. Dr. Vaughan must go and go he did. Vaughan was soon offered the post of Bishop of Worcester by Prime Minister Palmerston, a old Harrow man himself. Vaughan refused. Public word of the offer had prompted another letter from Bristol from Symonds pere threatening exposure. Later offers of the sees of Rochester and Ely were also spurned and Vaughan instead retreated to a rustic church near Doncaster.

He returned to Harrow in 1861 for the dedication of a new library built in his honor. Not until Symonds' father died was Vaughan able to accept the appointment to be the Dean of Llandaff Cathedral in Wales.

The Rev. Dr. Vaughan's caricature from Vanity Fair
Posted by Tom Hughes at 9:02 AM