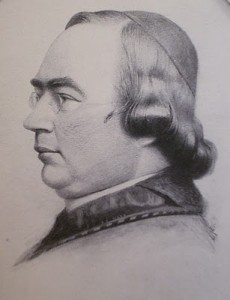 On a Sunday in Rome, Pope Pius IX proclaims the restoration of the Catholic hierarchy in England, dividing the country into twelve bishoprics led by Cardinal Nicholas Wiseman (left), created Archbishop of Westminster. "Pio Nino" fully expects three million Britons will return to the mother Church.

Wiseman proclaims the good news in a pastoral letter entitled "Out of the Flaminian Gate of Rome." He declares "the restoration of Roman Catholic England to its orbit in the ecclesiastical firmament." Wiseman so over-stated his new powers that the Queen supposedly asked "Am I Queen of England or am I not?"

Needless to say, Protestant feelings were aroused. The Whig Prime Minister, Lord John Russell, led a rabid "No Popery" campaign, labeling English Catholics "enemies within the gate, indulging in their mummeries of superstition." It was "Papal aggression" rumbled The Times, "We can only regard it as one of the grossest acts of folly and impertinence which the Court of Rome has ventured to commit since the Crown and the people of England threw off its yoke."

Lord Shaftesbury, attacking the "monstrous audacity" of Rome, and headed a newly formed Protestant Defence Committee. Russell rushed through Parliament a hastily drawn Ecclesiastical Titles Act, which declared all religious titles outside the Church of England, illegal. Mr. Gladstone, no Romish sympathizer to be sure, argued vainly against the bill. "Do you think so ill of the capacity of your religion to bear the brunt of free competition, as to say you will now attempt to fence it about with legal enactments, instead of trusting to its own spiritual strength ... If the truth is on your side, God will give you the victory."

The bill, despite its attendant rhetoric, proved toothless and in 1871, Gladstone, then Prime Minister, saw its repeal.
Posted by Tom Hughes at 12:45 PM