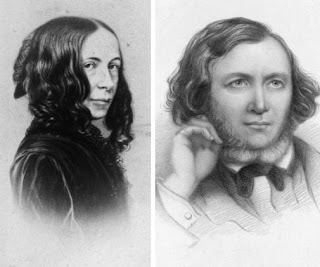 Accompanied only by Wilson, her maid, Elizabeth Barrett quietly leaves her family home at 50 Wimpole Street, London. It is her wedding day; Robert Browning is waiting at St. Marylebone Parish Church.

Stopping first at the chemists for some sal volatile, Elizabeth arrives at the church, in Robert's words, looking "more dead than alive." He is 33; she is nearly 40 and a semi-invalid from childhood. Her first book of poems, Prometheus Bound, had attracted Robert's attention and a correspondence and led to their fabled romance. In May, 1845, Robert paid the first of his many visits to Wimpole Street. Ostensibly on grounds of his daughter's poor health, Edward Barrett had grimly opposed Elizabeth's growing relationship with "that man." To remove her from Robert's society, Barrett had announced that the family was moving into the country, hastening the lovers delayed decision to elope.

After the service, the Brownings part at the church door; Robert to make plans for their escape to Italy and Elizabeth to return home, but before a bracing carriage ride across Hampstead Heath to compose herself. "How I suffered that day," she recalled. In a letter smuggled out to her new husband, she writes, "If either of us two is to suffer injury and sorrow for what happened there to-day - I pray that it may all fall upon me."

A week later, the Brownings, accompanied again by Wilson and Elizabeth's dog, the famous Flush, fled to the continent. On 21 September, a small notice appeared in The Times announcing the marriage of "Robert Browning, jun. Esq., of New-Cross, Hatcham, to Elizabeth Barrett, eldest daughter of Edward Moulton Barrett, Esq., of Wimpole Street." She left a letter for her brother, "Oh, love me George ... that I may find pardon in your heart for me after it is read." Her father declared that Elizabeth was as if dead; her letters to him were returned unopened.

The Brownings did visit England several times and Elizabeth was reconciled with some members of her family, but her father died unforgiving. After Elizabeth's death in 1861 in Florence, Robert returned to London, where he regularly visited the church on the Marylebone Road to kiss the altar.
Posted by Tom Hughes at 2:37 PM