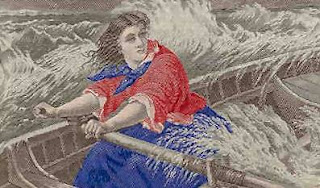 A North Sea storm slams a steam-packet into the rocks of the Farne Islands, off Northumberland. The saga of "The wreck of The Forfarshire" creates an unlikely heroine in Grace Darling, daughter of the keeper of the remote Longstone Light.

The Forfarshire, her boilers failed, is thrown into the rocks just after midnight. The ship is soon battered to pieces by the relentless sea and wind. Almost all aboard are swept away including the Captain and his wife, who'd pleaded with him to save her; his reply, "Would to God that I could, my darling."

Amid the storm's roar, Grace hears the "most awful shrieks" of the survivors and awakens her father. With but one small rowboat available, the elder Darling's advice is, in effect, "Go back to bed, child." At first light, the shattered ship can be seen some half-mile out across the still roiling waters. Against both her father and mother's wishes, Grace pleads, "Indeed, we must go!" Father and daughter put out and - to quote one of the innumerable accounts - "navigated their frail skiff over the foaming billows." Nine drenched and desperate people are plucked from the sea-swept rocks including a mother whose two children had been snatched from her arms during the night.

As word of the wreck and rescue in such a remote area spread, a correspondent wrote, "Surely such unexampled heroism will not go unrewarded." Even in these days before the telegraph, Grace Darling's name was soon known across England, a beloved heroine for a sea-faring nation. Arriving from everywhere, contributions to a testimonial fund reached £700. So many people requested a lock of her hair that a local paper worried, "There seems a probability if the demand should continue, that she will, ere long, have to seek an artificial covering for her head."

The Poet Laureate, Mr. Wordsworth, penned a lengthy ode, the sense of which can be summed up with "Shout, ye waves ... GRACE DARLING'S name." Thanked by a personal letter from the Queen, Grace was invited to dine with the Duke of Northumberland.  Yet she remained unaffected. The Scotsman asked, "What mortal girl could bear up against such rewards, such flatteries?"

Grace remained an unmarried lighthouse keeper's daughter until her early death from consumption in 1842. She was just 27. Her elaborate tomb in Bamburgh still stands not far from a small museum with the little lifeboat that brought her fame.

The "great" McGonagall, no Wordsworth he, wrote a lengthy tribute upon her death, concluding


Before she died, scores of suitors in marriage sought her hand;
But no, she'd rather live in Longstone light-house on Farne island,
And there she lived and died with her father and mother,
And for her equal in true heroism we cannot find another.

The painting from mcgonagall-online.org.uk
Posted by Tom Hughes at 10:03 AM