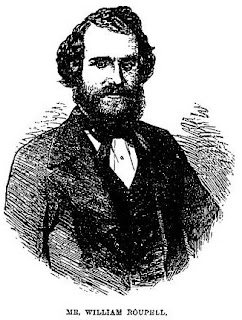 William Roupell, ex-MP for Lambeth, is sentenced to life in prison for forgery. Just 31, his chicanery and profligacy had exhausted a fortune of some £300,000.

The eldest son of a wealthy smelter, William trained as a lawyer and managed the family estate. Unbeknownst to his ailing father, William mortgaged several properties, counting on his "expectations." Well-funded, he began to move in higher circles. He won an expensive race for the House of Commons. Then disaster. His father, near death, revealed that of his four children only his youngest son was legitimate and would - by law - be his heir.

William was frantic. Within hours of the old man's death, he purloined the will and forged a new one, this time the Roupell estate would go to his mother over whom he had unbounded influence. The secret of William's birth would not cross her lips. The bogus will was accepted at probate, William escaped ruin - for the moment.

Unable to control his spending, he continued mortgaging and selling what he could.  At last, bankrupt, he fled to Spain. It was the sensation of the summer when Richard Roupell, the youngest son and rightful. heir announced he would sue to recover his estates from unlawful purchasers and his brother William had returned to admit his forgeries. "With the most perfect coolness and self-possession," William stood in the witness box and confessed all. While Richard managed to recover much of the family lands, William cannot go unpunished. Conceding, "My life has been one continued mistake," he begs for mercy. He reminds the court that he returned voluntarily, asserting "There are many quarters of the world open to me where I could have spent the remainder of my days in perfect safety."

Mercy is "utterly impossible," declares Justice Byles who pronounces the maximum sentence. There is much moral reflection on Roupell's fall and delayed contrition. The Times blames the sins of the father: "It is at the option of a man to contract what he may consider a safer and easier form of intimacy than a lawful marriage, but we may appeal to universal experience...that the end of such a decision is invariably repentance."

Ironically, the novel of the season is Wilkie Collins' "No Name," a story of two daughters who, when orphaned, discover their illegitimacy and find themselves penniless. Yet, The Annual Register concluded, "Fiction may here look with envy on the superior strangeness of Truth?"

Sketch from The Penny Illustrated Paper
Posted by Tom Hughes at 11:05 AM