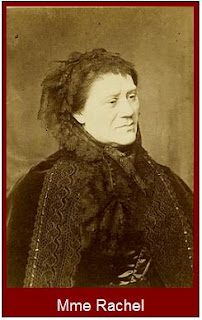 "Madame Rachel," the operator of a posh Mayfair beauty salon, is sent to jail for five years for fraud.

Sarah Rachel Levenson, a former East End fortune-teller, operated her salon at 47A New Bond Street on the theme, as espoused in her bestselling pamphlet of the same name, "Beautiful for Ever." Her annual income was estimated at £20,000, much of it from the purveyance of such "cosmetics" as "The Magnetic Rock Dew Water of the Sahara," and "Jordan River Waters." She also had a side income from well-to-do gents who'd pay handsomely to look through peep-holes at Madame's clients in their Arabian baths.

One of her customers was a wealthy Army widow named Mary Borrodaile. Madame somehow convinced  Mrs. Borrodaile that Lord Ranelagh, whom she met entirely by accident in the shop one day, had become infatuated with her. To snare the Viscount, Mary was advised to begin an extensive and, to be sure, expensive beauty regimen. To fan the flame, Madame passed along bogus notes from Lord Ranelagh (who was cleared of involvement) to Mrs. Borrodaile, who wrote back pathetic "My Dear William" letters. Thousands of pounds down the drain, friends of Mrs. Borrodaile intervened on the victim's behalf and charges were filed.

Heavily rouged, her hair dyed a bright yellow, poor Mary makes a very poor witness; a crueler newspaper described her as a "senescent Sappho," even the prosecution described her as a "foolish, misguided woman." Yet, her sad story wins a conviction.  The stiffness of the jail term is a surprise to all but none more so than Madame Rachel, who faints in a dead swoom and must be carried insensible from the Old Bailey. The Illustrated London News found Madame's plight rather pathetic: "Surely the court should have been full of perfume, and enamel, and chignons ... Have the plastered and dyed and painted over all forsaken their Jewess?"  But Serjeant Ballentine, who led the prosecution, called Madame Rachel, "one of the most filthy and dangerous moral pests that have existed in my time."

Her sentence served, the unrepentant Madame reestablished herself quietly near Portman Square. In 1878, she was arrested again and returned to prison where she died.

The photograph from the excellent vichist.blogspot.com
Posted by Tom Hughes at 12:16 PM