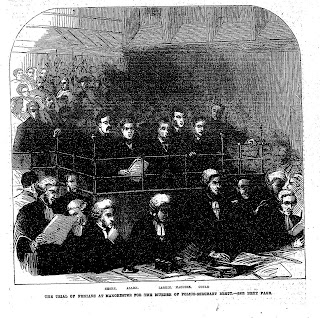 In Manchester, some 30 Fenians ambush an unescorted police van carrying the prisoners "Colonel Kelly" and "Captain Deasy", leaders of an abortive rising in Ireland that March. The unarmed police driver surrenders but, an officer riding with the prisoner in the van is killed by a bullet fired through the padlocked door. The bullet goes clean through his head.

The prisoners and most of the gang escape (the American-born Kelly and his comrade were never recaptured) but an angry crowd captures three members of the rear guard. The three - Allen, Larkin and O'Brien - are charged with the murder of Sgt. Brett. Allen is said to have fired the fatal shot.

The three were made to parade in a police lineup while in leg-irons, and identified by paid witnesses, it is no surprise that the jury quickly found them guilty. While there is no dispute that the men took part in the "breakout," there is no legitimate evidence that any of them actually killed the policeman. Expecting at worst lengthy prison terms, the three were instead sentenced to die.

Larkin told the judge, "I have nothing to regret ... I can only say, God save Ireland." They hung outside Manchester jail on 23 November. The Queen wrote her daughter, "We shall have to hang some & it should have been done before," although she did pray for them the night before the hangings. In Dublin, 50,000 people attended a mock funeral for the men, forever known as the "Manchester Martyrs." The poet T.D. Sullivan's ballad was sung across Ireland, with Larkin's words featured in the refrain sung to the tune of "Tramp, Tramp, Tramp.":

Ten years later, in the House of Commons, reference was made to the Manchester murderers. A then unknown Irish MP rose amid jeers to declare, "I do not believe, and never shall believe, that any murder was committed at Manchester." He was Charles Stewart Parnell.
Posted by Tom Hughes at 9:22 AM