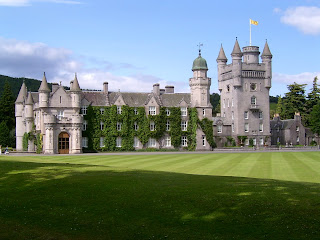 Victoria and Albert make their first visit to Balmoral. Seeking Highland air and privacy, they took a lease on the property sight unseen from Lord Aberdeen.

While the existing home was, in the Queen's words, a "pretty little castle in the old scotch style," it is simply too small for their family and royal retinue. An early visitor, the courtier, Sir Charles Greville reported that the Royal family "live not merely as private gentle---folks, but like very small gentle-folks, small house, small rooms, small establishment." Albert soon designed a new turreted Schloss which was ready by 1855. (Pictured in a modern photograph, left) In her journal, Victoria wrote. "Every year my heart becomes more fixed in this dear Paradise, and so much more so now, that all has become my dearest Albert's own creation."

Much of the expense was covered by the unexpected bequest of £250,000 from the Chelsea miser James Nield (see 30 August). The Queen, obsessed with her privacy, eventually acquired some 24,000 acres of surrounding Deeside.

Government ministers dreaded the summons to make the 600 mile trek to Balmoral; a cold, drafty and quite monotonous exile, where the formal lifestyle was dubbed "Balmorality." Disraeli went but twice; on his first stay, it rained throughout, on his second, he caught a miserable cold. Gladstone was so unnerved on his first visit, he put his foot through his pants while dressing in haste to be punctual for dinner, as the Queen demanded. Rosebery thought the drawing room was the ugliest he'd ever seen. Henry Campbell-Bannerman, who would become Prime Minister in 1906, made his first visit as a junior minister, comparing it to a convent, "We meet at meals and when we are finished each is off to his cell."

The family had its reservations as well; the children of the Prince of Wales threw annual tantrums at the prospect of visiting grandmama. As King, Edward VII gutted and modernized the place. For the Queen however, Balmoral remained a favored retreat, with sacred memories of Albert, captured in her book, Leaves from the Journal of Our Life in the Highlands.
Posted by Tom Hughes at 10:11 AM