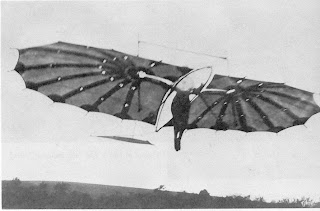 Percy Pilcher is fatally injured in a "flying" accident at Market Harborough.

The 32-year old Scot had been one Briton's leading aeronauts, experimenting with "flight" for five years using a glider - a bamboo frame covered with sailcloth. He wrote, "I ran to meet the wind with the front of the wings depressed somewhat... then raising the front edge a little, I am able to take a long soar down a slight incline." For greater height and distance, he had horses pull the glider and, further, had been experimenting with a small 4.5 horsepower motor to drive a screw propeller for the first true "free flight."

This day, Pilcher hopes to impress the eccentric MP, Henniker Heaton, who had expressed an interest. It could mean government support for Pilcher's work.  The day dawns wet and windy and Pilcher must wait until late afternoon for better conditions. Finally, Pilcher's horse-drawn glider, the Hawk, lifts off, quickly reaching a height of 60 feet. Suddenly, a cracking sound is heard and the Hawk "fell to earth with a terrible thud, Mr. Pilcher being underneath the wreckage." Badly injured, Pilcher never regained consciousness and died two days later.

The crash is blamed on "a knot coming loose on the rudder, which necessitated a sudden movement on the part of the occupant to re-establish the equilibrium of the machine, thus bringing an unwonted strain on a certain spar, which parted and occasioned the collapse."  Pilcher's death is not widely noted, although The Spectator conceded that the young man's experiments "have shown that human success in [flight] is a possibility of no very distant achievment."

Today, Pilcher is placed in the first rank, "the only man who by temperament, training and achievment could have anticipated the Wrights in powered flying." Less than a year before his death, Pilcher wrote, "In America, experiments are continually being made, and it would be heartrending not to try and keep one's place in the work, that is being done."