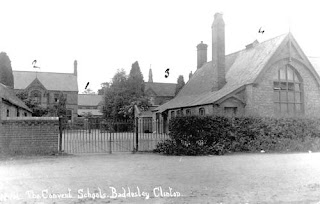 With a wedding in the convent chapel at Baddesley-Clinton in Warwickshire, one of the most delightful (or oddest) love stories of Victorian England comes full circle.

In 1859, Edward Dering, a wealthy young Guardsman, fell in love with Rebecca Dulcibella Orpen. Going to Miss Orpen's guardian, the widowed Lady Georgiana Chatterton.  Dering apparently failed to make his intentions as clear as he might have wished. Lady Chatterton, who was old enough to be Dering's mother, thought he wanted to marry her. She unhesitatingly accepted and the gallant Dering, rather than disappoint her, married her ladyship at St. George's, Hanover Square.

In 1867, Miss Orpen married Marmion Ferrers, Dering's close friend, who lived - albeit poorly - at Baddesley-Clinton, a moated mansion in some disrepair.  The two couples, four friends, decided to live together at Baddesley-Clinton.  The old house would be thoroughly refurbished through Dering's considerable wealth, now supplemented by a career of writing some remarkably turgid novels. Devout Catholics all, Dering converted, the four oversee construction of a new church and convent school in the town.

In 1876, Lady Chatterton died. Marmion Ferrers passed away in August, 1884. Having waited 26 years, Dering does the proper thing and waits the required 13 months, to - at last - on this day marry Rebecca Orpen Ferrers.

Dering died in 1892, she lived on alone at Baddesley-Clinton until her death in 1923. The four are buried together in the churchyard.

The convent chapel from windowsonwarwickshire.com
Posted by Tom Hughes at 10:41 AM