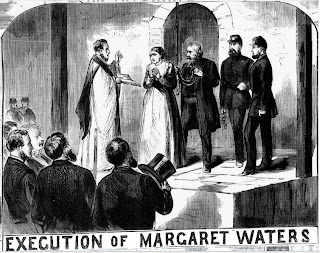 Margaret Waters is convicted of murder and sentenced to hang.

Police south of the Thames had reported an alarming number of babies found dead beneath viaducts or in alleyways. Detective Sgt. Relph, who headed the investigation, took notice of a series of newspaper advertisements offering homes for unwanted children. Responding to one in Lloyd's Newspaper, Relph heard from a "Mrs. Oliver" who promised that a child in her care "would be well brought up—and be to us in all respects as our own." Five pounds would cover all expenses.

Relph managed to locate a Londoner named Cowen who had dealt with this woman. Cowen's daughter had been raped and he had sought a home for his unwanted grandson, agreeing to house her with "Mrs. Oliver." But, operating under assumed names and meeting her clients away from her home, the woman was difficult to locate. Relph finally traced her to a Brixton house where they found 11 infants living in filth. Four soon died, including the baby Cowen. In three weeks, he had gone from a healthy baby to one described in court as "miserably wasted... in a profound stupor."

The "Brixton Baby-Farmer" was tried for murder.  Prosecutors say the infants were fed little but opium so that they might "starve noiselessly." In her defense, the 35-year old Waters said the Cowen baby was sickly from birth and his death had no doubt cost her money since a couple in "affluent circumstances" would have paid handsomely for a boy. Convicted, she appeals in vain for mercy, "I am as innocent as any one of those little children." The Daily Telegraph thought the crime was more manslaughter than murder and argued for a respite of the death sentence. The Times disagreed, calling the crime "an outrage on every human, not to say womanly, instinct," and parents who turn over their unwanted or illegitimate children to such women are "little better than accomplices." On 11 October, Margaret Waters was hanged at the Horsemonger Lane gaol.

The intrepid Sergeant Relph was rewarded with £20 for "conspicuous service." The Brixton case prompted Parliament to enact the Better Protection of Infant Life Act in 1872 but "baby-farming" did not disappear. As late as 1896, the "Ogress of Reading," Amelia Dyer was hanged for disposing of her "babies" in the Thames.

Sketch from The Illustrated Police News
Posted by Tom Hughes at 10:57 AM