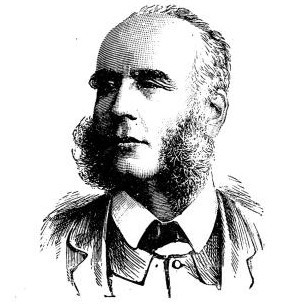 With no discussion of the "painful details" and no dissenting votes, the House of Commons takes the rare action of expelling a member. On 6 May, Capt. Edmond Verney, Conservative member for North Bucks, plead guilty to "conspiring to procure for corrupt and immoral purposes a girl of nineteen." The scandal is all the more embarassing given Verney's prominent role in the National Vigilance Association, dedicated to the abolition of vice in the great city.

Verney led a double life. Married and a 30-year Naval officer of distinguished record, whose father - "a high-minded English gentleman" - had represented the constituency for many years, Verney had the alter ego of "Mr. Wilson." Using a procuress named Madame Rouillier, he lured young women from a registry for governesses in Belgravia to clandestine meetings in Paris. Miss Nellie Blaskett proved his undoing. Brought to the French capitol, she balked when left alone with her prospective employer. The persistent "Wilson" took her to the Eiffel Tower, holding, what he called, "her pretty little hand." When Nellie still refused his entreaties, he paid her way back to London.

Some weeks later, on a winter day in Westminster, Miss Blaskett, walking with her mother, espied a man with a "peculiar walk" and cried out, "Mother, there is that beast Wilson!" Verney fled to the continent but returned to be arrested upon arrival at Charing Cross. His unavailing defense was that he had been guilty of no act of indecency and, rather, behaved as a gentleman, paying her return fare to London. In a final, unavailing, appeal for mercy, his counsel declared, "His position is lost, his rank in the Navy is gone, his honored name has departed from him." He received a one year sentence. The Tory leader, W.H. Smith calls the expulsion a "disagreeable duty."

The Press links Capt. Verney's downfall with his conspicuous zeal in the purity crusade: The Spectator opines, "Dwelling on that subject, we fear does not cleanse the mind."
Posted by Tom Hughes at 7:35 AM