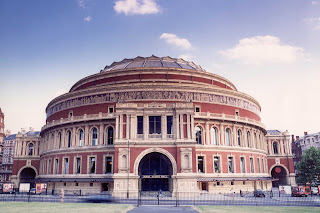 Queen Victoria, dressed in deep mourning clothes with a plain widow's cap, lays the first stone for the construction of the Hall of Arts and Sciences, which she promptly renames the Royal Albert Hall. The land, on the site of Gore House (see 7 May), on the southern side of Hyde Park, was purchased with profits from the Great Exhibition. The Prince of Wales declares that the Hall will form "a prominent feature in the scheme contemplated by my dear father for perpetuating the success of that Exhibition by providing a common center of union for science and art." Prince Albert had hoped to make Kensington a center for museums, research and cultural facilities. His critics dubbed the scheme "Albertopolis."

The Queen's remarks are brief and, as usual, barely audible to most. Frankly, she admits she'd rather not be there: "It has been with a great struggle that I have nerved myself to a compliance with the wish that I should take part in this day's ceremony." With a trowel of solid gold she spreads the mortar ("evenly and neatly" noted the admiring scribe from The Illustrated London News. The cornerstone laid, the Queen strikes it with an ivory hammer, pronouncing it "Well and truly fixed." Cannon fire resounds from the Park and an orchestra strikes up Prince Albert's own composition, "L'Invocazione all'Armonia."

Designed by Francis Fowke, the Hall opened in 1870. On that occasion, the Prince of Wales officiated alone, explaining that his mother was simply too overcome with emotion to attend the event. From opening day on, the hall has been plagued by "imperfect acoustics," specifically a persistent echo. One improvement scheme believed, albeit inexplicably, to improve the sound involved planting mushrooms on the roof. Still, according to The London Encyclopedia, Albert Hall is the only place a composer can be assured of hearing his work twice.
Posted by Tom Hughes at 10:59 AM