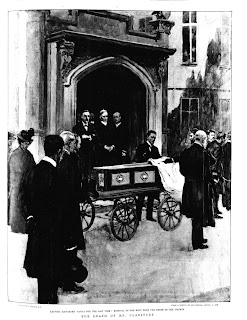 Mr. Gladstone, after a long and painful fight with cancer, dies at his country seat at Hawarden in Flintshire. It is Ascension Thursday, a fact that the devoutly religious Gladstone no doubt appreciates. In fact, he dies shortly after morning prayers; his last word, a simple "Amen." He was 88.

Four times Prime Minister, Gladstone was a man who aroused the full spectrum of emotions, but in death, several years after his political retirement, he was widely and sincerely mourned. The current Tory Prime Minister, Lord Salisbury, tactfully avoids any mention of the fractious issues associated with the "Grand Old Man," choosing instead to eulogize him in the Lords as "a great example of a great Christian man." At Windsor, the Queen issues the proper public statement: "I shall ever gratefully remember his devotion and zeal." Yet, in her diary, she writes: "He was very clever and full of ideas for the betterment and advancement of the country, always most loyal to me personally, and ready to do anything for the Royal Family; but alas! I am sure involuntarily he did at times a great deal of harm."  In a letter to her daughter she adds, that while "clever," Gladstone "never tried to keep up the honor and prestige of Great Britain."

At the funeral in Westminster Abbey, the Prince of Wales heads the mourners, over the Queen's objections. The Princess of Wales had written to Gladstone's widow, to praise her late husband as "one of the most beautiful upright and disinterested characters that has ever adorned the pages of history."

Mrs. Gladstone, as the bier is lowered, is heard to cry, "Once more, just once more," before she is led away by two of her sons. Two years later, the bier would be reopened for her burial at his side.
Posted by Tom Hughes at 10:55 AM