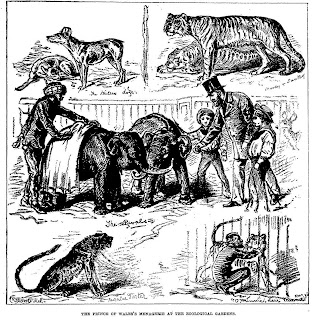 The Zoological Gardens at Regent's Park welcome the last of the incredible menagerie collected by the Prince of Wales on his just concluded trip to India. The leading naturalist Francis Buckland crowed. "No greater event has ever occurred than the accession of the collection just made by his Royal Highness."

Two boatloads of animals had docked in Portsmouth, in all 69 mammals and 97 birds, and a bi-pedal curiosity, a Madras curry cook to join the Prince's kitchen staff. Two giant Indian elephants were given a Royal Marine escort as native mahoots drove the mighty beasts through slumbering villages along the present day A3. The rest, save the cook, are crated and caged for travel by train. Beware the tigers; a curious sailor had lost a hand on the voyage.

The simple size of the collection overwhelms the Zoological Society which can manage only ""admirable and ingenious arrangements" for the animals at first. The curious public, drawn by newspaper reports, must be kept at some distance. A good deal of interest is paid to two baby elephants, born aboard ship. Named Rustam and Omar, the calves are quite playful, "continually lifting up a foot to shake 'hands' with visitors." The inventory includes some rare species, such as the spotted porcine deer from mountainous Nepal.

If truth be told, the Prince's predilection is more toward shooting than collecting big game. While in India, several of the potentates arranged "sport" for their distinguished visitor. On one occasion, from the comfort and safety of his howdah, the Prince killed six tigers. He wrote his sons "I have had great tiger shooting. The day before yesterday I killed six, some were very savage. Two were man-eaters. Today I killed a tigress and she had a little cub with her." The cub survived to be included in the menagerie.

During the voyage, taxidermists worked round the clock preparing "the numerous and valuable natural history specimens shot by the Prince."
Posted by Tom Hughes at 7:54 AM