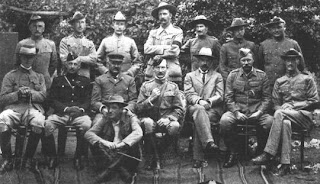 At 9:20 on a Friday evening, a small announcement is posted at Mansion House in London which reads: "MAFEKING IS RELIEVED!" After 217 days, a British relief column had broken the Boer siege of the British garrison at Mafeking, a border town west of Pretoria.

The garrison, commanded by Robert Baden-Powell ("B-P"), was outnumbered 6-to-1. Yet, the colorful B-P (founder of the Boy Scouts after the war) hid their weakness through deception, including dummy forts and makeshift guns. He also armed some natives, creating the "Black Watch." The infuriated Boer General Cronje called it "an enormous act of wickedness," demanding "Disarm your blacks and act the part of a white man in a white man's war!"

The lifting of the siege, while of little or no military significance, is greeted with hysteria at home by a public starved for good news. Spontaneously, cheering crowds spread the word through London. The Lord Mayor emerges to make an impromptu speech, concluding: "British pluck and valour, when used in a right cause, must triumph." Happy crowds converge on Mrs. Baden-Powell's home near Hyde Park Corner. The street demonstrations go on for days across the country and a strange new word appears in the papers: "mafficking," meaning unrestrained celebrations.

The Morning Post correspondent in Mafeking exulted, "It is good to be an Englishman ... [The Boers] are good but we are better and have proved so for several hundred years."


Once again, banners, fly!  Clang again, bells, on high,
Sounding to sea and sky, Longer and louder
Mafeking's glory with Kimberly, Ladysmith
Of our unconquered kith, Prouder and prouder.

Baden-Powell, front row center, courtesy of Scout.Org
Posted by Tom Hughes at 8:00 AM