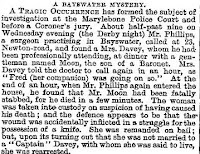 "The Bayswater Mystery," in the disapproving words of The Times, "reveals a state of things too well known to a large part of the London world, too little known to the rest." Frederick Moon, son of Sir Francis Moon, a respected Alderman in the City, is found murdered, stabbed to death by his mistress, who weeps, "I fear I did it in a scuffle."

The younger Moon, a bachelor at 41 and a wealthy brewer, lies on the dining room floor in the home of "Mrs." Flora Davy. It is a most unconventional establishment, presided over by a mysterious "Captain" Davy and tenanted by several single women. "Mrs." Davy, it turns out, is Hannah Newington, whose husband had left for Australia some years before "owing to her bad conduct." She had been Moon's mistress for twelve years. The dining room is in disarray; shattered crockery, an overturned coal-scuttle, and a bloody carving knife amid the debris. Before she was led away, "Flo" - as Moon knew her - is permitted a last kiss on her dead lover's lips.

She was soon indicted for murder, a charge reduced before her trial to manslaughter. Several acquaintances of the couple would testify to their frequent quarrels. A Capt. Elliot recalled Flo's vow, "By Jove, I will stab you someday." Portrayed by her doctors as "an habitual drunkard," Flo stands accused of stabbing her lover in a drunken rage after he had threatened to end their relationship. Under the law of England at the time, she cannot take the stand in her defense. Defense counsel portrays Moon as a man gripped by despondency over everything from his mother's death, gambling losses at that day's Derby, to a change in the licensing laws likely to affect his business. Expert medical witnesses suggest the possibility that Flo was trying to wrestle the knife from Moon and he fell upon it during the scuffle.

In his appeal to the jury on behalf of the accused, Mr. Parry reminded them, "the sin of such a relation was not wholly on the side of the woman." The jury found her guilty of manslaughter and upon hearing the sentence of eight years, Flo fainted and had to be carried insensible from the Old Bailey.

The Times hoped the tragedy would awaken those who were "spending their lives in a sort of quicksand of social confusion and moral corruption."
Posted by Tom Hughes at 12:11 PM