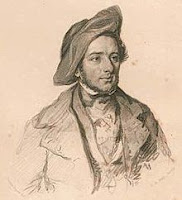 Clubland reels with word that the General Committee of the Reform Club is looking for a new chef. Since the Reform's new building opened on Pall Mall in 1841, the brilliant but temperamental Frenchman Alexis Soyer had presided over the club's heralded kitchens, which he designed, and had been described as "spacious as a ballroom and white as a young bride." The Reform Club is headquarters to Britain's ruling Whig Party and so shocking was word of Soyer's departure, Punch was only half-jesting when the humor magazine suggested that the Whig Prime Minister Lord John Russell would have to resign as well.

In fact, Soyer's genius (rewarded with an annual salary of £1000) had been so celebrated that more radical members feared that the club - a meeting place for "reformers of the United Kingdom" - would become home to mere gastronomes. Soyer had survived several clashes with his managers, but the exact circumstances of his sudden exit remain unexplained to this day. According to his "memoirs," he objected to plans to allow members to bring "strangers" (non-members) to dine, grousing that he had no wish to work at a "restaurant."

It was for his special dinners that Soyer had become renowned and none more so than the 1846 affair on behalf of a visiting Pasha. The entire seven-course menu made the papers but attention centered on Soyer's triumphant desert, Creme d'Egypte a l'Ibrahim Pasha. A three foot tall pyramid of fruited meringue, it was topped with an edible portrait of the guest of honor, done in cream and jelly.

Soyer also found time to organize a Dublin soup kitchen in the famine years, a first-ever sanitary field-kitchen for the Crimean War and to write cookbooks with "economic and judicious" versions of his recipes for middle-class kitchens. During the Great Exhibition of 1851, Soyer resurfaced in London, opening - with typical bombast - The Gastronomic Symposium of All the Nations, at Gore House on Hyde Park.
Posted by Tom Hughes at 11:56 AM