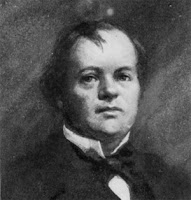 After a two week trial at the Old Bailey, Dr. William Palmer is convicted of murder. Of all the doctor-killers in Victorian England (and, alarmingly, there were quite a few), none is more infamous than the surgeon from Rugeley. Yet Dickens, who attended the trial, recalled Palmer's "constant coolness, his profound composure, his perfect equanimity."

Tied by some to as many as fourteen deaths, (including his wife, his mother-in-law and his brother), Palmer was tried for just one, the strychnine murder of John Cook. Palmer and Cook were fellow men of the Turf; Cook owned horses, Palmer bet on them, both with indifferent results. Ironically, it was shortly after one of their rare victories that Cook took violently ill. He told friends, "I swear that damned Billy Palmer dosed me." The prosecution laid out an undeniable record of swindle and forgery, but the medical evidence was inconclusive. A parade of doctors passed before the jurors; seven arguing death due to poisoning, eleven willing to suggest a non-criminal cause of death, most often, tetanus.

Despite the obvious disagreement among the experts, the jury returned a speedy verdict. Lord Chief Justice Campbell dons the traditional black cap to pronounce the death sentence, declaring from the bench: "However destructive poison may be, it is ordained by Providence, for the safety of its creatures, that there are means of detecting and punishing those who administer it." The doctor's lawyer petitioned the Home Secretary to delay the hanging until discrepancies in the medical evidence could be answered. Petition denied.

Palmer was returned to Staffordshire to hang at the county gaol on 14 June before 30,000 people. Asked by the warden if he had any confession to make, Palmer reiterated, if equivocally, "I am innocent of poisoning Cook by strychnine." With unfaltering step but obvious pallor, he went to the gallows promptly at 8 a.m. In a last quip, turning to Calcraft, the veteran hangman, Palmer asked, "Are you sure this is safe?" The huge crowd shouted obscenities and roared its entire approval at the drop.

In Rugeley, officials sought Parliamentary approval to change the town's name, so notorious had become its associations. The Prime Minister said he had no objections, providing they named it after him. Once again, Mr. Palmerston's sense of humor went unappreciated.
Posted by Tom Hughes at 12:20 PM