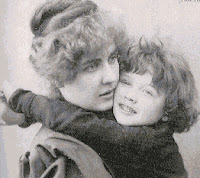 Queen Victoria's absence fails to halt the marriage of Oscar Wilde at St. James', Paddington; the groom quips, "In this fine weather, I asked her to remain at Osborne." His bride is Constance Lloyd, grand-daughter of a wealthy Irish attorney. Wilde's friend Frank Harris thought Constance was a woman "without any particular qualities or beauty" and there were many whispers that the impecunious poet-playwright is marrying for money. Indeed, the wedding has been delayed a month to allow Oscar time to settle several outstanding debts.

He met Constance in May of 1881 and told his mother that night, "By the by, Mama, I think of marrying that girl." Upon her betrothal, Constance wrote her brother, "I am...perfectly and insanely happy." The church is packed, not the least with reporters who devote most of their attention to the ladies attire, designed by the famous aesthete himself. The wedding gown is made of "rich creamy satin... with a delicate cowslip tint." Six bridesmaids, all Constance's cousins, are in "ripe gooseberry" silk. For once, Oscar goes unnoticed.

In Paris for the honeymoon, Wilde tells a reporter that as Disraeli brought art to English oratory, he shall demonstrate the "pervading influence of art on matrimony." Meeting a friend, Robert Sherard, Oscar insists on sharing explicit details of his wedding night; "It's so wonderful when a young virgin ..." is where Sherard cut him off.

Despite the timely and helpful death of Grandfather Lloyd, Oscar soon exhausted Constance's fortune in the fitting out of their new home in Chelsea. Within four months, Constance was pregnant with the first of their two sons. Choosing to spend her time with the boys, Constance became - in the words of one of Wilde's biographers - "an exquisite shade."

Following the scandal of 1895 (see 25 May), she took the name Holland and forbade Oscar from seeing the boys. They never divorced. She once said, "My poor misguided husband...is weak rather than wicked." Constance died of spinal paralysis in April of 1898. She was 40.  The photograph shows Constance with her son, Cyril.
Posted by Tom Hughes at 12:25 PM