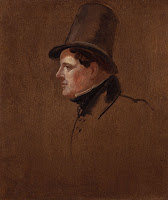 On a dying pilgrimage to the seat of his Church, Daniel O'Connell makes it only as far as Genoa where he succumbs to a brain tumor at the age of 71. His heart is removed for burial in Rome and the body put aboard ship for Ireland where he is beloved as "the Great Dan...the Liberator of his people."

Thousands line Dublin's River Liffey and the traditional keening wail escorts the ship bearing the body. As the coffin is borne to a waiting carriage, all kneel wherever there is space. While the grief is sorely felt, The Times - never a supporter - was, nonetheless, not wrong in its conclusion: "O'Connell had been weighed in the balance and found wanting. He was already dead to history when he left these shores."

A brawling Kerryman, an attorney who mobilized the West country masses, O'Connell fought and won in the 20's and 30's civil rights for Catholics. In the 40's, however, he was challenged by the "young Ireland" movement; men less committed to the Parliamentary struggle and "moral force." O'Connell had responded with his most strident rhetoric yet, demanding repeal of the "unfounded and unjust" Anglo-Irish Union. In 1843, his "monster" meetings drew unheard of crowds, peaking at Tara where 1.5 million people filled the ancient seat of Irish Kings. An alarmed British government ordered O'Connell to cancel his next meeting at Clontarf, vowing to use troops to disperse the crowds. O'Connell backed down. He called it "prudent, wise and, above all things, humane" but his foes called it cowardice. The Nation, Young Ireland's voice, declared: "O'Connell will run no more risks."

Although O'Connell went to jail for his "repeal efforts," his influence was all but gone upon his release. Depressed by the famine and his own poor health, O'Connell faded away. His last speech to the Commons, where he formerly incited either fierce loyalty or loathing, could barely be heard. Disraeli called it a "strange and touching spectacle." Gladstone said too much when he called O'Connell "the greatest popular leader the world has ever known," but O'Connell's countrymen have been less kind. Yeats, for example, dismissed him as "the great Comedian" contrasting his "bragging rhetoric and gregarious humor" with the "proud and silent Parnell."

O'Connell painted by Sir George Hayter
Posted by Tom Hughes at 7:51 AM