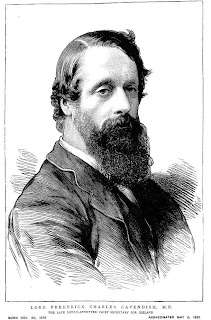 In Dublin's Phoenix Park, Lord Frederick Cavendish (left), the newly posted Chief Secretary for Ireland, and Mr. Burke, the permanent Under-Secretary, are attacked and brutally murdered. Burke is the target, The United Irishman called him "the slimiest toad living." Young Cavendish, Prime Minister Gladstone's nephew, might have been spared had he not flailed at Burke's attackers with his umbrella. Both men are stabbed repeatedly and their throats cut. The assassins use surgical knives, ironically purchased at a cutlery shop in London's Bond Street.

The murders are universally condemned; even the nationalist daily United Ireland put a black band of mourning around its front page as a "token of abhorrence and shame." The tragedy shatters a hopeful mood prompted only four days before by the release of Parnell, the Irish leader, from Dublin's Kilmainham Jail. Having pledged to work for an end to violence in return for an end to the eviction of tenant-farmers, an ashen Parnell declares "I am stabbed in the back."

Across the Channel, the reaction is vengeful. The Queen calls it "an unexampled horror" and demands "no concessions to those whose actions, speeches and writings have produced the present state of affairs in Ireland." A hitherto unknown group, calling itself "The Invincibles" soon takes responsibility. A police manhunt is unavailing until, early in 1883, investigators arrest James Carey, a Dublin town councillor and slumlord. He had been seen in the Park that day and police were told he owned such long-bladed knives. Carey, who admits only to waving a white flag to alert the gang of Burke's approach, becomes the star witness. For the trial, the Crown was forced to threaten reluctant jurors with 100-pound fines. On Carey's testimony, five men hang, including Joe Brady, a local stonemason, accused of being the actual killer.

Carey, dubbed "The Prince of Informers," paid the price of his craft. While aboard a ship bound for South Africa and a new life under a new name, he was recognized and shot dead. The gunman, a Donegal peasant named Patrick O'Donnel, who had no connection to the murders, was brought back to England, tried and hanged.

For many years, a small cross marked the spot in the Park where Cavendish and Burke died; it has long since disappeared.
Posted by Tom Hughes at 7:15 AM