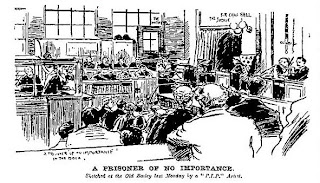 At London's Old Bailey, Oscar Wilde is convicted of sodomy and sentenced to two years hard labor. Thus, in a mere three months time, his cataclysmic downfall is complete. In 1895, Wilde was at the peak of his fame; he had two plays running in the West End, including the new hit, The Importance of Being Earnest. His private life is less praiseworthy; married with two sons, Wilde had conducted a flagrant relationship with Lord Alfred Douglas which had achieved unspoken notoriety.

Only days after Earnest opened, Douglas' father, the Marquis of Queensberry left a card at Wilde's club which read, "To Oscar Wilde: posing as a somdomite [sic]." Wilde ignored advice to ignore the card and sued for libel, a disastrous decision. Enough evidence was introduced to make a case for the truth of the claim and the Marquis was acquitted. That very day - 5 April - Wilde was arrested at the Cadogan Hotel.

His first trial ended in a hung jury. It is best remembered for Wilde's famous remark from the dock about "the love that dare not speak its name." Awaiting re-trial, Wilde was freed on bail for the first time. Friends encouraged him to flee the country, a steam yacht aboil on the Thames for that very purpose. He refused to bolt, calling it "nobler and more beautiful to stay." Yet, it was the ugly details that prove his undoing; boy prostitutes, compromising letters, even the stained bedclothing from his suite at the Savoy, re-hashed in the second trial. Wilde's defense, headed by Sir Edward Clarke, attacks his accusers as common blackmailers. However, for the Crown, Sir Frank Lockwood argues: "Were it not that there are men willing to purchase vice in the most hideous and detestable form, there would be no opening for these blackmailers to ply their calling."

Justice Alfred Wills presiding, calls it "the worst case I have ever tried ... you, Wilde, have been the center of a circle of extensive corruption of the most hideous kind." The sentence is the severest allowed under the law. Wilde, reeling noticeably, cries out, "My God ... May I say nothing, my Lord?" With a dismissive wave from the judge, Wilde is led away to gaol and oblivion. Outside, a ragged crowd jeers its approval and harlots dance in the crowded street.

The Press cry is almost unanimous; e.g. The National Observer: "There is not a man or woman in the English-speaking world possessed of the treasure of a wholesome mind who is not under a deep debt of gratitude to the Marquess of Queensberry for destroying the High Priest of the Decadents."  The Penny Illustrated Paper featured this mockingly titled sketch.
Posted by Tom Hughes at 12:15 PM