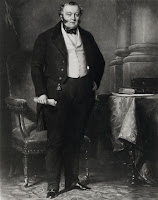 George Hudson, rises before a sullen House of Commons to deny any wrong-doing as his rail empire collapses around him. Pausing - if only for effect - to gather his emotions, Hudson calls the charges against him "unfair", any errors on his part "unintentional", and describes himself as a man who "cares nothing for pecuniary considerations." The Times scoffs: "Since the days of non mi ricordo, we never heard such an audacious disclaimer of knowledge where knowledge was expected... indeed, ostentatiously pretended."

A linen draper from Yorkshire, Hudson had parlayed an inheritance into control of near half the railways in England. Capitalizing on the "railway mania" of the early 40's, he amassed a huge fortune and political influence as MP for Sutherland. Obese and uncouth, he bought his way into the best London society.  The Railway King entertained lavishly at his splendid home at Albert Gate in Knightsbridge. As the "mania" cooled, however, disgruntled investors began raising embarrassing questions. One observer quipped: "How was Midas ruined? By keeping everything but his accounts." Stock price manipulation, paying dividends out of capital and profit-skimming are but a few of the allegations.

Weeping denials notwithstanding, Hudson is soon a ruined man. The total losses in the collapse of the railway boom in the late 40's was estimated to be £80,000,000. Endless lawsuits by vengeful investors left Hudson without fortune or reputation. The fashionable world quickly abandoned him. They delighted, too, in snubbing Mrs. Hudson, retelling how - when shown a bust of Marcus Aurelius, she asked, "Is that the present Marquis?" The society diarist Greville writes: "Most people rejoice at the degradation of a purse-proud vulgar upstart."

Until he was unseated in 1859, Hudson's MP status gave him immunity from personal debts. Driven to exile in France, he returned in 1869 and served a brief jail term. Released and provided with an annuity by grateful friends, Hudson retired modestly to Pimlico, without influence save as chairman of the smoking room at the Carlton Club.
Posted by Tom Hughes at 7:56 AM