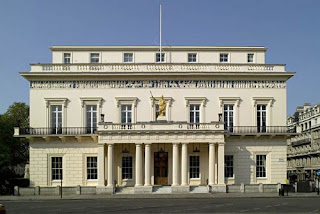 The so-called "Coffee Room Revolt" ruffles the staid Athenaeum, the stuffiest of London clubs. The official history of the club describes it as "a serio-comic affair the story of which is not too creditable to the dignity of the Athenaeum." The management committee had recently raised the table charges from sixpence to a shilling and, more nettling to many, announced the employment of an official carver to slice the hot and cold joints put out for members.

The Athenaeum, founded in 1824, drew its members from the highest levels of both the temporal and spiritual worlds; the Bar, Arts and Sciences, and the Bishops of the Church of England. Kipling said the atmosphere in the club reminded him of "a cathedral between services." Such men are not likely to rebel save over issues of the greatest moment and limiting an Englishman's access to his roast beef is one of those occasions. 38 members, regular diners all, had demanded a full membership meeting to request "a return to the old prices and regulations which have so long afforded satisfaction."

The meeting is fully attended and the debate is heated. The committee, citing a coffee-room deficit of some £1,000, argues that the tradition of allowing each member to have a whack at it had proven only that "artistic carving was becoming a lost art, and that the waste was excessive." Nonetheless, when put to a vote, the membership overwhelmingly rejects the proposed changes. They grudgingly agree to a shilling charge for dinner, but luncheon service shall remain at a sixpence. A member's right to carve for himself being restored, the Athenaeum falls quiet once again.

Rival clubmen are much bemused as the Athenaeum's kitchens are infamous. The joke is that members of the Athenaeum appreciate all the arts and sciences, except gastronomy. The reputation lingers; the actor and member, Sir Ralph Richardson, admitted to a London newspaper that the food at the Athenaeum was below par. His advice, "One should take a box-lunch but drink their wine."
Posted by Tom Hughes at 7:22 AM