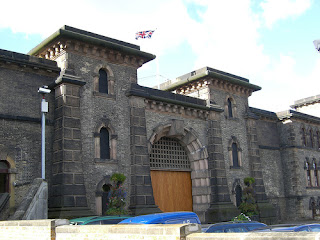 In the first trial, the Wiltshire girl's testimony had sent her former tutor to jail for four years with hard labor. The Rev. Henry Hatch, chaplain at Wandsworth jail (left), had sought companions for his adopted daughter by advertising as a tutor for young girls. The Plummers placed Eugenia and her 4-year old sister Stephanie with Rev. Hatch but the arrangement lasted only two weeks. Mrs. Plummer retrieved the girls, claiming that her daughters were unhappy sleeping on calico sheets. Within days, however, the Plummers complained to their Bishop that the girls had been molested.

Under the law of the day, neither Hatch nor his wife could testify at his trial. The jury was left with Eugenia's sordid tale, "narrated with steadfast countenance, with perfect mastery of the language descriptive of matters usually left in decent obscurity." Convicted, jailed and reviled, Rev. Hatch fought to clear himself from Newgate Prison. By filing perjury charges, he's now able to confront his accuser in court.

His lawyer dismisses Eugenia's tale as "entire fiction, the result of a prurient and depraved imagination." While the exact charges are "unfit for publication," Hatch admits that he and his wife did permit the girls to come into their bed, but only beneath the coverlet. Indeed, Mrs. Plummer had suggested that her daughters - who had been to several schools - needed "petting." Hatch denies parading half-naked or worse in front of the girls. Lawyers for the girl ask what motive had she to lie but Eugenia was overheard telling her sister, "I hate the Hatches." Summing up, the trial judge admits the case comes down to "contradiction upon contradiction."

The jury finds Eugenia guilty but urges "the utmost mercy," given her "want of moral and religious education." The judge, placing much of the blame on the parents of the young liar, orders Eugenia to spend three weeks in a detention center. The child will then be placed in the care of "a lady of known benevolence and good judgement in the treatment of juvenile offenders."  Hatch's career was wrecked and he ended his days as a rural clergyman in Essex.
Posted by Tom Hughes at 7:49 AM