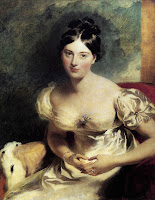 Gore House, Kensington, freehold and contents, goes on the auction block. The splendid mansion, on the southern edge of Hyde Park, had been the home of Lady Blessington (right) whose open relationship with her step-daughter's estranged husband, the French dandy Count D'Orsay, had appalled respectable society. Regardless, her home had become one of the leading literary and political salons; Dickens, Bulwer-Lytton, Thackeray and Disraeli, were frequent visitors.

It all ended suddenly when a man disguised as a pastrycook entered the house in early 1849 and served D'Orsay with papers demanding payments on his massive debts. Since Lady B. was also being hounded by creditors, they fled to France leaving only what they couldn't carry. "The occupants having retired to the continent" - is how Mr. Phillips, the Mayfair auctioneer, decorously put it in his advertisements. "The mansion requires neither substantial repair nor decorations, as very large sums [have] been lately expended thereon."

The auction runs two weeks; "splendid furniture, works of art, costly jewels and recherche property," as well as a 5000-volume library, all go toward wiping out the debts and leaving a £1500 surplus. The curious are drawn to see the ill-famed house, including society leaders Lady Jersey and Lady Hertford who would never have called upon the previous tenant. Thackeray is much affected, writing a friend: "I have just come from a dismal sight - Gore House full of snobs ... brutes keeping their hats on, I longed to knock some of them off and say, Sir, be civil in a lady's room! Ah, it was a strange sad picture of Vanity Fair."

Less than a month later, at her new home in Paris, Lady Blessington died. She was 59. Gore House was briefly rented during the Great Exhibition by Mr. Soyer, the famous chef hosting the "Gastronomic Symposium of All Nations"; serving gourmet meals in "the whilom boudoir of the Blessington." Gore House was pulled down in the 1860's to make way for the Royal Albert Hall.
Posted by Tom Hughes at 7:19 AM