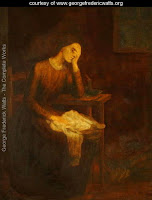 Tom Hood, the "Poet of the Poor," dies of tuberculosis at 46. Bankrupt himself, victim of his own feckless speculations, Hood spent his final months seeking a government pension for his wife.

His greatest triumph had come in the Christmas, 1843, edition of Punch. "The Song of the Shirt" was an indictment of the "slop-selling" industry. Seamstresses, for long hours and scant piecework wages, stitched away at their "slop," slang for cheap clothing. That October, "a wretched-looking woman named Riddell, with a squalid, half-starved infant at her breast" had been hauled into court by her employer on charges she had pawned some of her cloth to buy food. The man claimed he paid good wages; about 7p a garment, out of which the woman must buy her own needle and thread.

Though The Times condemned the plight of the needlewomen as worse than Negro slavery, the furor passed. That is until Hood's poem, seemingly out of place in the holiday edition of a humor magazine. It was an immediate sensation:


With fingers weary and worn, with eyelids heavy and red,
A woman sat, in unwomanly rags, plying her needle and thread.
Stitch, stitch, stitch; In poverty, hunger and dirt,
And still with a voice of dolorous pitch,
She sang the "Song of the Shirt."

In a closing lament, Hood wrote, "Oh, God! that bread should be so dear, And flesh and blood so cheap!" Sales of Punch tripled. Hood's career was reborn. When a prostitute was found dead in the Thames, a not uncommon occurrence, he offered "The Bridge of Sighs":


One more unfortunate, weary of breath
Rashly importunate, gone to her Death ...

But now, near death himself, Hood pleaded with Whitehall for a pension for his wife and children: "Certain classes at the poles of Society are already too far asunder; it should be the duty of our writers to draw them nearer by kindly attraction, not to aggravate the existing repulsion... But I am too weak for this task, the last I had set for myself."  The government allotted his widow £300.

The Song of the Shirt by GF Watts.
Posted by Tom Hughes at 7:03 AM