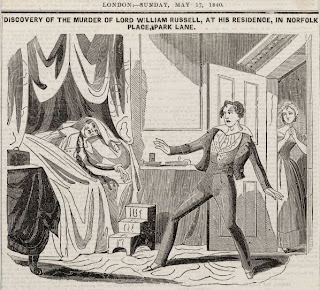 London is shaken by the brutal murder of 73-year old Lord William Russell. A widower at 72, the victim is the Duke of Bedford's brother and an uncle of the rising Whig politician, Lord John Russell, a future Prime Minister. Prime Minister Melbourne, with perhaps unnecessary detail, informs the Queen that his Lordship was found "quite cold and stiff" and the wounds "had nearly divided his head from his body."

At first believed to be a burglary with violence, The Times notes. "The excitement produced in high life is almost unprecedented, particularly among those of the nobility & gentry who live in comparative seclusion." Within a matter of days, however, police arrested Francois Courvoisier, the dead man's valet who had been given notice.

The case brought to trial was weak, based heavily on flimsy and circumstantial evidence, and public sympathy seemed to go towards the handsome 23-year Courvoisier and an acquittal seemed likely. Dramatically, an eleventh hour witness came forward; a Frenchwoman from a dingy Leicester Square hotel where Courvoisier had once waited tables. She testified that he left a parcel with her around the day of the murder. Inside it, police found several items stolen from Lord William's home, including much silver plate. The shaken defense counsel can only lamely suggest the evidence might have been planted in such a disreputable hostelry. The finding turned the day against the accused. The Lord Chief Justice wept while pronouncing the death sentence while Courvoisier showed no emotion.

Before hanging at Newgate, he confessed, admitting that his conscience had told him "Thou art doing wrong" but, "I hardened myself against this voice and threw myself on my victim." A crowd said to exceed 100,000 people watched the execution, Dickens and Thackeray among them. In a magazine piece entitled "Going to See a Man Hanged," Thackeray noted the condemned man's "wild, imploring look [and] pitiful smile." The account ended there, "I shut my eyes as the last dreadful act was going on." The images stayed with him, "I fully confess that I came away down Snow Hill that morning with a disgust for murder, but it was for the murder I saw done."
Posted by Tom Hughes at 7:10 AM