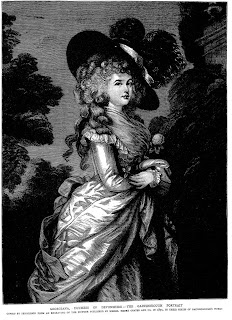 In the most audacious art theft of the Victorian era, Gainsborough's "Duchess of Devonshire" vanishes from Agnew's Gallery on Old Bond Street. The thief must have hid until past closing and, avoiding an ineffectual watchman, cut the painting free from its gilt frame with "no unpracticed hand" and passed it out a window to an accomplice.

The "Duchess" is one of England's best-known paintings, just sold at auction at Christie's for a price of £10,600, the highest ever in London. The art world is incredulous; who would steal such a picture of "remarkable notoriety?" Only one man, Adam Worth. Described by one expert as "the greatest criminal mastermind of the 19th Century," Worth served as Conan Doyle's real-life model for the "Napoleon of Crime," Professor Moriarty. An expatriate American employing a cadre of malfeasants, Worth specializes in burglary and fraud; a blown bank safe in Boston ($450,000), a diamond heist in Capetown ($1,000,000), a Turkish bank swindle ($400,000), etc. Living aboard a yacht, Worth often visited London. Seeing the "Duchess" in Agnew's window, he decided to steal it that very night.

Agnew's soon received a ransom demand with a piece of the canvas. The Spectator was among many publications insistent that no ransom be paid: "No picture in the country will be safe. Plate is locked up, but the pictures in our country-houses have hitherto been considered as safe as the bookcases or carpets." No ransom was paid and the sensation passed, but for periodic false claims of the portrait's recovery.

Finally, in 1901, the "Duchess" was found in Chicago. By then, Worth was a dying man with impoverished children. He had, at last, fallen into the hands of the law, and spent much of the 1890's behind bars. Working through the Pinkertons, the storied American detective agency, Worth agreed to exchange the painting for a reward of £5000 paid directly to his children. After 25 years in a tube, the undamaged "Duchess" hung again at Agnew's. Ironically, the American banker Pierpont Morgan soon bought it for £30,000 and took it back to the U.S.
Posted by Tom Hughes at 12:17 PM