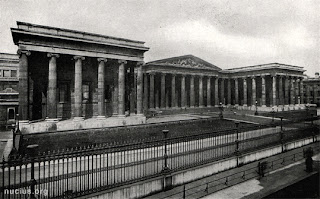 In London Police court, the Clerk of the Works at the British Museum (Mr. Charles Pulman) is found guilty of having ordered the poisoning of the pigeons which nested by the thousands in the museum portico.

The story broke when an anonymous letter from "A Reader in the British Museum" had appeared in The Times under the headline "Barbarous Cruelty." The correspondent described the stricken birds, staggering about the pavement with their beaks contorted in anguish. In many cases, the poison failed to prove lethal and the sickened birds had to be clubbed to death. The disconsolate writer condemned the attack, "There is no prettier sight in London than to see these tame and trustful creatures fearlessly gathering round the feet of those whose daily amusement it is to feed them."

The Royal Society for the Prevention of Cruelty to Animals charged that thousands of birds were killed by a "fiendish mixture" of oatmeal, bird seed and wine. William Brightwell, the museum's head gardener, testified that Pulman had ordered that the laced seed be put down to stupefy the birds, making their removal easier. However, wine being too expensive for the scope of the project, Brightwell substituted methyl alcohol, with fatal results.  Though guilty, Pulman's punishment is light - a mere five shilling fine. The presiding judge, while bowing to the RSPCA's "exceedingly creditable" presentation, concludes that the pigeons had become an intolerable nuisance.

Within days, however, the story recaptured the headlines when Pulman sacked the hapless gardener. Brightwell took his case to the mighty Times; with 25 years in Her Majesty's service, he had been dismissed simply for having done his duty "faithfully and truthfully." The paper demanded an explanation, "Surely [Mr. Pulman] must remember the parable of the unmerciful servant." Pulman admitted that the action was "singularly ill-timed," said he said Brightwell's dismissal had been long contemplated. However, public concern for the lowly gardener would not flag and Brightwell was found a new post at the Houses of Parliament.

The Museum's south portico - from nucius.org
Posted by Tom Hughes at 7:28 AM