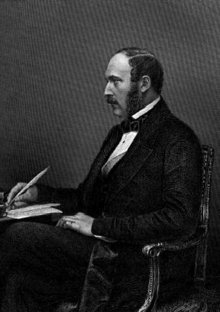 The nation is plunged into mourning by the terse announcement: "On Saturday night, the 14th inst., at 10 minutes before 11 o'clock, his Royal Highness the Prince Consort departed this life, at Windsor Castle, to the inexpressible grief of Her Majesty and of all the Royal Family."

Prince Albert was just 42. Never in robust health, he'd been burdened with work and family cares. Although already ill, he had gone to Cambridge to confront the Prince of Wales regarding the Nellie Clifden affair (see 16 November). Back at Windsor Castle, he collapsed with a severe fever on 2 December. His condition steadily worsened until the Royal physicians alerted the nation, "the symptoms have assumed an unfavorable character."  He had seemed to rally and more encouraging bulletins had been issued, all making the news of his death that more shocking.

In their final moments together, Victoria and Albert whisper in German, she asks for and receives "einen Kuss." At his last breath, the Queen kisses Albert's "dear heavenly forehead" and is led away, wailing "Oh! My dear Darling." She wrote her eldest daughter, Victoria, Crown Princess of Prussia, "My life as a happy one is ended."

The cause of death is announced as typhoid fever, but some modern medical detectives suspect stomach cancer. Victoria blamed her eldest son for Albert's illness and didn't want him anywhere his father.  Only a message from his sister brought the  Prince of Wales to the bedside at the last minute. The embittered Queen writes Vicky, "Much as I pity, I never can or shall look at him without a shudder."

Victoria could not bear the funeral, retreating instead to Osborne. Horrified that Albert should be buried near her "wicked uncles" at Windsor, she began planning the construction of the mausoleum at Frogmore. She also ordered that nothing be changed in Albert's room. Lord Clarendon recalled: "Everything was set out on his table ... the pen and blotting-book, his handkerchief on the sofa, fresh flowers in the glass, etc. etc., as I had always been accustomed to see them, and as if he might have come in at any moment."

Today, the 150th anniversary of the Prince's death, the Daily Mail reports a London auction house has obtained a letter written by the Queen two years after her husband's death.  Commiserating with a friend who was about to lose a loved one, Her Majesty wrote of her own loss: "To the poor Queen this blessing so needful to her has been denied and she can only hope never to live to old age but be allowed to rejoin her beloved great and loyal husband before many years elapse."

The Queen survived her husband by nearly forty years.
Posted by Tom Hughes at 6:59 AM