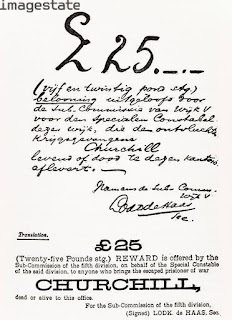 Since escaping from a Boer P-O-W camp nine days before, the young war correspondent had become something of a national hero. Captured in mid-November in an attack on a British reconnaisance train, Churchill claimed noncombatant status as a correspondent for The Morning Post.  The Boer officers who took him in, however, insisted Churchill took an active part in the affray. Not content to await clarification, Churchill went over the wall of a prison latrine in Pretoria. In his memoir, My Early Life, he recalled the moment:

"Now or never! I stood on the ledge, seized the top of the wall with my hands, and drew myself up. Twice I let myself down in sickly hesitation, and then, with a third resolve, scrambled up and over ... I was free!"

Churchill hopped a train heading east to Portuguese territory.  He abandoned the rail before daybreak, still in Boer territory. Perhaps only Churchill could have found a British mine operator willing at great risk to hide him, albeit at the bottom of a rat-infested pit. The object of dramatic headlines at home - CHURCHILL ESCAPES! - and a desperate manhunt, he was finally smuggled out aboard a goods train to the coast. At first, a consulate staffer turns him away only to be greeted with a roar: "I am Winston Bloody Churchill!"

The Boers accuse Churchill of breaking his word not to escape. Worse, political enemies at home accused him of abandoning fellow POW's. (Claiming "My conscience is absolutely clear," he later won two libel actions.) In his first post-escape dispatch to the Morning Post, Churchill used his celebrity status to rally the homefront: "Are the gentlemen of England all fox-hunting? ... For the sake of our manhood, our devoted colonists, and our dead soldiers, we must persevere with this war."
Posted by Tom Hughes at 4:44 AM