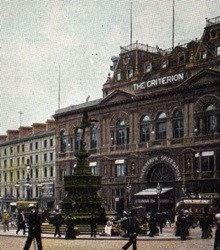 Emma Cummins, a one time barmaid at London's famous Criterion Restaurant at Piccadilly Circus, is found dead in her rooms near Hyde Park. The verdict was suicide, she had taken some phosphor.  A note left behind implicates Lt. Henry Ponsonby, a decorated naval officer and scion of one of England's finest families.  The note concluded, "If this will be a warning to anyone who is likely to be tempted I shall not have died in vain .. Don't spare him for as sure as I am writing this, he has killed me."

Lt. Ponsonby at first denied any involvement with the dead woman. When summoned to appear at her inquest, however, he confessed to a "very slight" acquaintance. He admitted renting the flat where she died; he said it was a temporary arrangement.  Their relationship had ended as "we did not get on very well together."  When he asked her to move out, she got angry and vowed she would ruin him. Friends of the dead woman said Emma had told them that Ponsonby had promised to provide her with £25 a month.  Instead, he sent her away with £10 and a venereal disease. It should be noted that Ponsonby's doctors testified that the officer had a clean bill of health.

Regardless, the coroner's jury quickly affirmed the police ruling of suicide and the foreman - citing their "intense feelings of disgust and abhorrence" - added "Lt. Ponsonby, although not legally, is morally responsible in causing the death of the said deceased. And, further, he is deserving of the severest censure."
The coroner administered nothing more than a finger-wagging "Let this be a lesson to you" lecture, which the officer heard with "dignified submission."

The public's verdict, however, was much more severe. A 30-man police escort was required to lead Ponsonby through an unruly crowd that was compared to an American "lynch mob." Ponsonby was soon stricken from the rolls of Her Majesty's Navy. His wife divorced him.

The Times, deploring the entire case, found fault with the increasingly popular "bars," such as the Criterion, with their "perpetual half-flirtation." The paper warned other barmaids: "Girls who suffer themselves to be led away have no right to expect constancy on the man's part ... It is, so to say, a recognized part of the game."

Photo from fynesharteharrington.wordpress.com
Posted by Tom Hughes at 6:33 AM