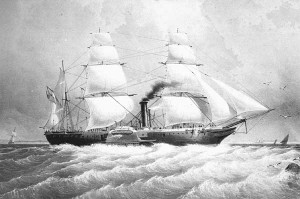 After several tense weeks, the United States agrees to release two envoys from the Confederate States of America who had been arrested and removed from a British mail ship.  The RMS Trent (pictured) had been stopped and boarded off Cuba in early November.

"The Trent affair" inflamed emotions on both sides of the Atlantic. When news of it reached London, Prime Minister Palmerston had barked to his cabinet, "You may stand for this but damned if I will!" He soon ordered 3000 troops to Canada. A bellicose message to Washington, drafted by the Foreign Office, was submitted to the Queen for routine review. Prince Albert, rising from his deathbed (see 14 December), toned down the demarche by adding that the British fully believed the American captain had acted without orders.

In the U.S., some Anglo-phobes thought a war with England might help re-unite the nation now in Civil War. President Lincoln, however, said he wanted "just one war at a time" and seized at the proffered face-saving opportunity. On Christmas Day he ordered Secretary of State Seward to draft the appropriate documents. Seward meets with the British Ambassador, Lord Lyons, who reported that the American seemed overcome with the emotion of the moment. Nonetheless, Seward must remind London of the War of 1812, fought over U.S. objections to similar British interference with "neutral" shipping. The peaceful resolution is accepted by all but the most warlike.  The New York Times thought the agreement was based on "the great principles of maritime law to which the United States has always adhered," and, in London, The Times commented, "We draw a long breath and are thankful."

The two Confederate envoys soon arrived at their posts. James Mason, a bluff Virginian, had been sent to plead the Confederate cause in England. He had little success.  A staunch proponent of slavery, he had co-authored the Fugitive Slave Law which is unpopular even among pro-Southerners in England. His eccentric dress and crude personal habits (chewing and spitting tobacco, even in the House of Commons) soon "damaged him terribly," according to the official U.S. delegation. Mason, however, thought he fit in well; he wrote his wife that the English aristocrats remind him of "our best Virginia circles."
Posted by Tom Hughes at 1:44 PM