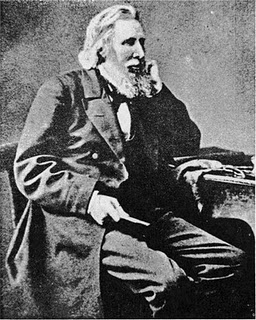 A Dublin courtroom is "crowded to suffocation" for the opening of a libel trial growing out of a vile scandal.

Dr. Sir William Wilde (left) is Ireland's leading oculist.  His son, Oscar, is a boy of nine.  Mary Travers, a former patient of Dr. Wilde's and a doctor's daughter herself, had been spreading the most disgraceful stories.  The word is that she and the doctor had a lengthy affair which he had ended.  In retaliation, she had circulated around Dublin a pamphlet claiming that she had been raped by her doctor, who had disabled her with chloroform. She did not name Dr. Wilde directly, but the figure of "Dr. Quilp, a newly made knight" was unmistakeable. She hired newsboys to pass the pamphlet out during a lecture Dr. Wilde gave at the Y.M.C.A! Her screed concluded, "It is sad to think that in the 19th Century a lady must not venture into a physician's study without a bodyguard."

Dr. Wilde might well ignore Miss Travers - after all, he had fathered three illegitimate children in his day.  [Oscar Wilde had three half-sisters who all died young.]  Lady Wilde, however, was not willing to let the matter pass unchallenged.  Lady Jane Wilde, whose florid verse appeared under the name "Speranza", wrote to Dr. Travers to complain of "the disreputable conduct of your daughter" and warned "No threat of additional insult shall ever extort money from our hands." Incredibly, Miss Travers sued Lady Wilde for libel.

The trial, lasting several days, lives up to its bawdy expectations. Mary describes the alleged rape, recalling how she awakened to find Dr. Wilde babbling, "Spare me, oh, spare me" and offering to pay her way to Australia. Dr. Wilde did not testify. On the stand, Lady Wilde insisted that her husband's philandering was beside the point, "I took no interest in the matter." It was her reputation that she was defending.

After a week's titillation, the jury found that Miss Travers had been libeled by Lady Wilde but awarded her just one farthing. The Wildes were made to pay all the court costs, however, exceeding £2000. Dr. Wilde's medical reputation was badly hurt by the scandal.


An eminent oculist lives in the [Merrion] Square.
His skill is unrivaled, his talent is rare,
And if you will listen I will certainly try
To tell how he opened Miss Travers' eye.