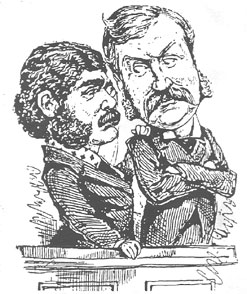 Another opening; another show for Gilbert & Sullivan.

At the Savoy Theatre, The Gondoliers premieres to universal acclaim. The Globe's critic called it, "One of the best, if not the best." W.S. Gilbert praised Arthur Sullivan's "magnificent" score and Sullivan, in turn, lauded his partner's "individual brilliancy." Yet Gondoliers will mark the beginning of the end for the famous partnership.

The cause of this bitter disagreement became laughingly known (to all but the participants) as "The Great Carpet Quarrel."  Gilbert, an attorney by training and ever-sensitive to slights, real or perceived, erupted on receipt of his first royalty check from Richard D'Oyly Carte, the impressario who had staged their work for almost a decade. From the proceeds of The Gondoliers, D'Oyly Carte has deducted £4500 for "pre-production costs," including £500 for a new lobby carpet. Gilbert argues that a lobby carpet is not covered under their agreement to pay for "repairs incidental to the performance." After storming out of his meeting with D'Oyly Carte, Gilbert writes to Sullivan: "I left him with the remark that it was a mistake to kick down the ladder by which he had risen - a sentiment which I hope will meet with your approval."

But Sullivan sided with D'Oyly Carte. Calling both gentlemen "blackguards," Gilbert severed relations with Sullivan: "The time for putting an end to our collaboration has at last arrived. After the withdrawal of Gondoliers, our united work will be heard in public no more."

In the end, D'Oyly Carte - flushed by the show's profits - agreed to refund £1000. Having won his point, Gilbert sought a reconciliation. Sullivan was receptive, "I am physically and mentally ill over this wretched business. I have not yet got over the shock of seeing our names coupled not in brilliant collaboration over a work destined for world-wide celebration, but in hostile antagonism over a few miserable pounds."

The partnership, however, already strained by diverging ideas on music, had sustained an irreparable blow. Subsequent efforts are not their best. In 1897, at a benefit performance of The Sorcerer, the two bowed coldly without speaking and never met again.

Sketch from g-and-s.org
Posted by Tom Hughes at 5:04 AM