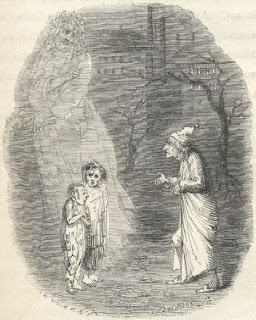 Charles Dickens' A Christmas Carol is published to immediate acclaim and frantic sales.

Dickens came up with the idea for his holiday tale while on a visit to the great mill city of Manchester earlier that year.  There, he was struck once again by the poverty amidst the affluence.  It took Dickens but six weeks to pen the tale of the redemption of Mr. Scrooge, "a squeezing, wrenching, grasping, scraping, clutching, covetous old sinner!" Still, he had not completed the writing until early December, requiring a heroic rush to publish in time for the holiday.

Dickens oversaw all the publishing details; A Christmas Carol appears in an elaborate, illustrated, gilt-edged volume and first day sales - at a modest five shillings - are a remarkable 6,000; 15,000 were sold by Christmas Eve. Exhausted by the effort, Dickens "broke out like a MADMAN." The effort is worth it. Thackeray exulted: "It seems to me a national benefit and to every man or woman who reads it a personal kindness."

For Dickens, however, it brought little happiness or money. The story is promptly plagiarized; "Parley's Illuminated Library" came out with a ten-penny edition, "re-originated from the original." In early January, Dickens sued and quickly won an injunction. "The pirates are beaten flat," he cried. In the end, however, his adversaries would just file bankruptcy leaving the author with nothing but huge legal bills. Presaging the gloom of Bleak House, he wrote: "It is better to suffer a great wrong than to have recourse to the much greater wrong of the law."

Dickens soon feuded with the publishers (Chapman & Hall) over the final bills for the fancy printing. Sounding a bit like Scrooge himself, he fussed: "What a wonderful thing it is, that such a great success should occasion me such intolerable anxiety and disappointment."  Dickens was in a bit of a money crisis; his last novel, Martin Chuzzlewit had also failed to meet expectations.  Firing his publisher, Dickens decided it would be cheaper to live abroad and took his pregnant wife and family into Italian exile, remaining there until the spring of 1845: "I am not afraid, if I reduce my expenses; but if I do not, I shall be ruined past all mortal hope of redemption."

Illustration from dickenslit.com
Posted by Tom Hughes at 4:25 AM