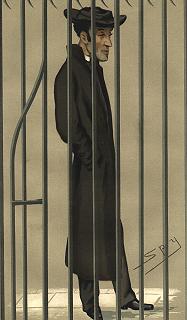 An irreligious confrontation for a Christmas Eve, to be sure, takes place in the doorway at St. James's Church in Hatcham.

The Rev. Arthur Tooth refuses to admit a minister sent by the Bishop of Rochester to replace him. Mr. Tooth had been admonished by his Bishop to cease certain "Romish" practices. In 1874, Parliament had passed the Public Worship Regulation Act.  It was "Low Church" versus "High Church."  The former had hoped to drive out the rituals of the Catholic mass which had been creeping onto the altars of the so-called "High" church. Specifically, the Rev. Mr. Tooth was accused of countenancing "immense wax candles, bells and incense" and he dared to perform his duties while dressed in red robes.

Tooth claimed civil law had no jurisdiction in his church. Independently wealthy and Cambridge-educated, Mr. Tooth had nonetheless become a popular figure in his working class parish and standing with him on this Sunday morning are two dozen churchwardens, representing - if you will - "muscular Christianity." The Bishop's minion is allowed to read his statement and then must perforce withdraw.

There was no violence.  Tooth simply told the other chap, "You may not enter."  The matter is handled with the courtesy befitting two gentleman of the cloth. Such defiance of the See, however, could not be tolerated and the matter soon stirred even the secular world. Suddenly, St. James's in a grim section of S.E. London, became a weekly Reformation battleground. Police had to be called out to preserve Sunday morning order; local roughs - eager for a row and ignorant of the issues - chose up sides.

When ordered to surrender the keys to his church, Rev. Tooth again refused. He was finally ruled to be "contumacious" and ordered to jail. There, he languished for 28 days - winning martyrdom status. Released, he rallied his supporters and repeated his defiance, "What you are opposing is the intrusion of secular authority in spiritual matters." One exasperated Bishop prayed for "the extraction of Mr. Tooth." The Times denounced him as well: "He was imprisoned for contempt, he is released with contempt."

After his release, Tooth broke back into his old church one Sunday morning.  He threw open the doors for a sunrise service for 400 of his faithful. The police arrived too late.

In the end, Tooth's original jail sentence was overturned on a technicality and he threatened to sue for false imprisonment. Instead, he resigned from St. James's claiming "My health is broken." He relocated to Croydon where he operated a boys orphanage.

The Rev. Mr. Tooth in Vanity Fair
Posted by Tom Hughes at 3:50 PM