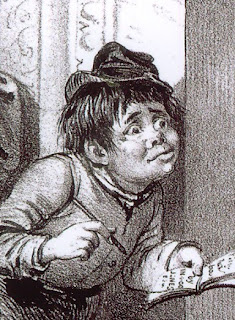 At about 1:00 am, a cheeky lad is discovered hiding beneath a sofa in the Queen's dressing-room in Buckingham Palace.

Edmund (Edward, it varies) Jones is a 17-year old tailor's son who had been found on the Palace grounds two years before. Dismissed then as a harmless prankster, the boy was freed with a simple warning. This visit, in which he gained access to the Queen's private rooms, cannot be laughed off. Her Majesty, awakened by the commotion, is greatly upset.  The palace doctors note "symptoms of other than a satisfactory character" beset their Royal patient, who is expecting her first child.

"The Boy" Jones is called before the Privy Council that very afternoon. He admits having jumped the wall along Constitution Hill and then enetred the palace through an open window. For two nights, until he was found by a Palace page, Jones had the run of the place. He claims to have sat on the very throne of England. Sleeping beneath beds and sofas by day, he prowled the kitchens by night. Asked why he did it, Jones says "I want to know how they live at the Palace, I am desirous of knowing the habits of the people," and he suggests he might one day write a book.

The Press demands the boy be severely dealt with and that security at the Palace be intensified before a more dangerous intruder enters the precincts. Jones gets three months in jail, with required time on the treadmill. Yet within days of his release the following March, he was once again found in the Palace. Exasperated, the Privy Council then orders an additional three months at hard labor, followed by impressment into the Royal Navy. The last trace of the "Boy Jones" came at his discharge, in Malta, in 1847.

The incidents provided evidence for needed improvements at the Palace which Prince Albert called "a disgrace to the Sovereign and the nation." Parliament approved funds for modernization and refurbishment of the Palace. Among the additions, the now famous balcony facing the Mall, first used to acknowledge the cheering crowds drawn to London for the opening of the Great Exhibition in 1851.

Sketch from Jan Bondeson. Queen Victoria's Stalker: The Strange Story of the Boy Jones. Amberley, 2010.
Posted by Tom Hughes at 9:54 AM