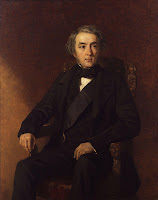 Edward Jackson, a London fence, is ordered transported for a term of ten years for his role in the sensational case of Lady Ellesmere's stolen jewels.

In January of 1857, William Atwell and a few mates were lurking about the West End hoping to do the odd bit of pilfering. They soon espied a carriage bearing a noble crest.  They did not know that the carriage was carrying the Countess of Ellesmere who had left her home in St. James's Square and was heading for Paddington Station for a train to Windsor Castle.  To visit Her Majesty, the Countess had packed a small case with her finest jewels.  This case and the rest of her various portmanteaus were tied to the top of the carriage.  Alas, the jewel case was not very well secured and Atwell and his chums simply ran alongside the vehicle and pulled it free. Somehow, the case wasn't even missed until the Countess arrived at the station.

The thieves were rather ignorant of their good fortune and took their booty off to Shoreditch where Jackson was the first to open the locked case. The thieves thought they had swiped an actress' trunk with costume dresses and paste jewelry. Shouted one, "Why, thems are sparks?" Jackson gave them £40 for the lot (the newspapers estimated the value of the stolen stones at £16,000).

Atwell was no dummy; he could read.  The papers were full of the news of the "Great Jewel Robbery."  He read a reward poster offering £500 for the missing case, and he realized he had sold too cheaply. After a heated palaver with Jackson, Atwell received a little more for efforts.  But the thief soon ran afoul of the law for another burglary and, facing a long jail term, he decided to sing. His lengthy confession, in the argot of a street thief, read like something out of Defoe or Fielding. His tale - notes The Annual Register - prompted great amusement "owing to the immeasurable difference between the commercial value of the prize and the ignorant estimation of the brigands."

Alas, very few of the Ellesmere jewels were ever recovered; Jackson had broken up much of the stuff so as to make it more safely hocked, a pair of diamond earrings were even flung into a vacant lot in Whitechapel .  Jackson admitted putting some of the rest down his WC.  Jackson's wife, who knew all about her husband's occupation, was found not guilty.

The Times suggested that the real villains of the entire affair were Lady Ellesmere's "stupid careless servants" who ought "be made to suffer a suitable penalty."

The portrait is that of the 1st Earl of Ellesmere who died between the day of the theft and the trial.  The jewels were always identified as "being the property of Lord Ellesmere."
Posted by Tom Hughes at 5:24 PM