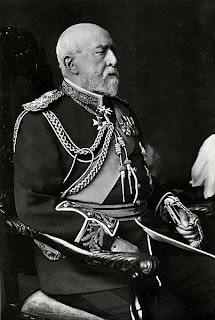 At Osborne, a holiday shooting party is marred by an accident that cost Prince Christian of Schleswig-Holstein his left eye.

The Queen's son, Arthur, the Duke of Connaught, was out shooting with two of his brothers-in-law, Prince Christian (married to Helena) and Prince Henry of Battenberg (married to Beatrice).  The three men are hunting in a semi-circle when, espying a bird, the Duke fires. The bird falls, but so does Prince Christian, in dreadful pain, hit by spray pellets from the gun.

The Prince is borne by the beaters to Osborne House, and Dr. George Lawson, Harley Street's best oculist, is summoned. His advice is simple, the shattered eye must be removed to save the good eye. The Queen is horrified. Sir James Reid, Victoria's personal physician, wrote a colleague, "She spoke as if Lawson and I wished to do it for our own brutal pleasure." Victoria grudgingly okayed the procedure but ordered her doctors never to speak of it in her presence.

The operation is a success. A brief inquest concludes that the shooting had been "one of those inexplicable accidents which too often occur even among the most careful and expert sportsmen." All reports on the incident stressed that it occured before luncheon to discourage talk among the lower orders that drinking had been responsible for any carelessness. Left unsaid was the undoubted record of clumsiness that had been laid to the poor Duke. In his youth, Arthur accidentally fell out the billiard room window at Buckingham Palace. Later, given command of a cycling regiment in the Army, he fell off his bike while returning a salute. He would seem to have been a less than ideal hunting companion.

Still, the glass eye proved no hindrance to the injured Prince. He was able to carry on with his life.  In truth, he had little to do; the Princess of Wales thought he did "nothing but eat and shoot other people's pheasants." Prince Christian, never a handsome man, was less so with his glass orb. Friends recall that he kept a large collection of replacements which he brought out for favored guests, including a blood-shot version for days when he felt poorly.

The Prince photographed so as to hide his glass eye.
Posted by Tom Hughes at 1:44 PM